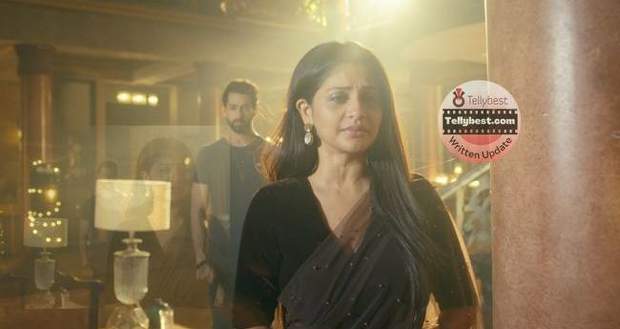 Rudra wakes up as Imlie starts to leave and calls out for her. Imlie apologizes for walking him up and tells him that she will stay here because she can’t bear to leave him in that condition.

A sigh of relief escapes Rudra’s mouth and he says he is happy to have his daughter by her side and Imlie leaves the room while Atharva hears the conversation.

At the Rathore house, Arpita tells Rupi about the situation at the Rana house and Rupi gets worried for Imlie and asks Arpita to call Imlie back home.

Hearing this Cheeni starts clapping her hands sarcastically and tells both Arpita and Rupi that it’s her ring ceremony the next day and they should do something for her but instead they are chanting Imlie, Imlie.

In Rudra’s bedroom, Rudra tells Devika that Imlie will be staying with them and she tells him that they have to make sure that Imlie doesn’t suffer.

Atharva goes after Imlie to thank her for staying.

So Imlie clarifies that she is staying here for her father and not for her ex-husband and she stumbles.

Seeing this Atharva rushes to save her and Cheeni enters and hands them her wedding invitation.

Seeing the wedding card Atharva goes into despair and Imlie grows her anger.

The next morning, Cheeni manages her wedding arrangements and Anu tries to manipulate Cheeni to have her ring ceremony at the Rana’s.

Listening to Anu’s words Cheeni thinks that she will use Arto’s love for her to her advantage.

In Arto’s room, Imlie brings in a glass of juice, and disturbed Atharva asks her why is she being kind to him as he doesn’t deserve it.

Further, he asks her why she doesn’t hate him so Imlie tells him that this is who she is and once she loved him, one truth doesn’t change the facts of another person.

Atharva asks for her forgiveness but Imlie tells him that she will forgive him when she can and swiftly leaves the room.

At the same time, Cheeni calls Arto to extend a hand of friendship and make use of the love he has for Cheeni.

She asks for the Rana house to be her wedding location and this hurts Arto deeply so he declines and cuts the call.

Frustrated Cheeni blabs out the call details and Anu thinks that no matter what she has to get Atharva in the wedding.

Later Anu and Cheeni march into the Rana residence and invites the whole family to the wedding.

The whole Rana family calls them shameless and asks them to leave as they are not interested in coming to Cheeni’s wedding.

At the gate, Anu manipulates Atharva to come to the wedding and cause a dramatic scene to get Cheeni back.

Inside the Rana house, Rudra declares that they have to go to the wedding so that Arto can face the reality and move on.

Later, in Cheeni’s room, Cheeni gets ready and Imlie taunts her for putting on makeup as her real self will reveal itself soon enough.

Regardless, Imlie wishes Cheeni a lot of happiness and Cheeni tells Imlie that she sacrificed Arto for Imlie but there is no pleasing her.

© Copyright tellybest.com, 2022, 2023. All Rights Reserved. Unauthorized use and/or duplication of any material from tellybest.com without written permission is strictly prohibited.
Cached Saved on: Wednesday 25th of January 2023 12:11:14 PMCached Disp on: Wednesday 1st of February 2023 09:16:34 PM