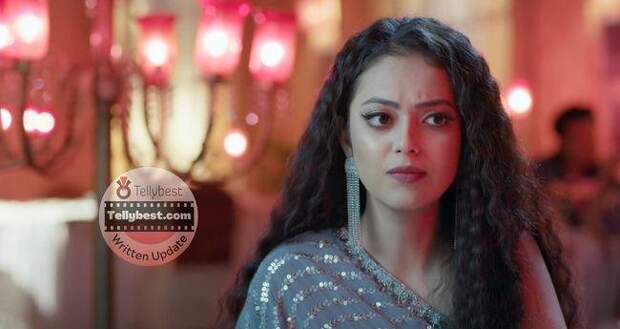 Today's Imlie 27th January 2023 episode starts with the Rana family getting excited as they think that Imlie and Atharva are going to be reunited with the confession of their love to each other.

Rupi asks how to bring the two downstairs while Ginni says that she has an idea.

Ginni starts playing music and all the housemates start dancing to the beat while Imlie and Atharva come downstairs hearing the noise.

The noise ends and Ginni drags Imli and Atgarva together in front of the families and tells them to dance.

The light turns pink and purple as a romantic song starts playing.

Atharva starts dancing with Imlie while she looks at him with an indescribable feeling.

Rupy jokes with Atharva telling him to take care of Imlie since she has never been on a date before.

Atharva gets surprised and asks Imlie if she has ever been on a date.

Further, Ginni jokes that she will teach him and turns to ask Divya who had confessed first.

Divya gets shy as she states that it was her husband who had said I love you first.

Rupy gets surprised as she questions Imlie and Atharva if they had ever said I love you to each other.

The family members encourage them to confess to each other while Imlie gets a little bit anxious.

She looks around at the family members while Atharva suddenly tells her that he loves her.

Imlie gets shocked as Atharva tells her that he has fallen in love with her every little thing and cannot imagine his life with her.

At last, Atharva states 'I love you, My dear Amigo' making Imlie think that he is saying it only as her friend.

Cheeni looks at the scene from the balcony and gets angry while Imlie notices her.

The family members continue to tell Imlie to confess but she looks at Cheeni and later tells Atharva that only words spoken from the heart are validated.

Meanwhile, Cheeni angrily gets ready as she thinks that Atharva is only hers while Sundar sees her and gets happy thinking that she is going to meet up with Abhishek.

Back in the hall, Imlie convinces Atharva to come up with an excuse.

However, the family members fail all their excuses and even see off Imlie and Atharva.

Later, Atharva tries to drag his stay with Imlie as he takes her into a gift shop with the excuse of buying a gift for Cheeni.

However, once inside, Atharva continues to ask Imlie what she likes while she keeps on answering whether Cheeni will like it or not.

Atharva tells Imlie that he feels hungry and wants to eat but she reminds him that he can eat at the restaurant since he is going on a date there.

Cheeni bumps into Rudra and they taunt each other while Cheeni leaves with an unimpressionable happy expression making Rudra suspicious.

Later, Imlie asks Atharva why he is making excuses to which Atharva tells her that he's scared.

Before Atharva can say much, Cheeni comes there and greets them.

Imlie leaves telling them to enjoy their date.

Later, at the hotel, Atharva is lost in his thoughts of Imlie while Cheeni looks at him annoyed.

Back at the Rana house, Rudra greets Abhishek and tells him that he called him up so that he can pick up Cheeni since was coming to meet him only.

Abhishek gets happy and tells them to call Cheeni downstairs.

Sundar calls Cheeni but she makes excuses about not being able to hear them.

However, Rudra hears the background music and calls Atharva to clear his doubts about them (Cheeni & Atharva) being at the same place.

When the same music is heard from Atharva's background, Rudra gets worried and wonders where Imlie is.

© Copyright tellybest.com, 2022, 2023. All Rights Reserved. Unauthorized use and/or duplication of any material from tellybest.com without written permission is strictly prohibited.
Cached Saved on: Friday 27th of January 2023 11:58:31 PMCached Disp on: Thursday 2nd of February 2023 08:17:04 PM