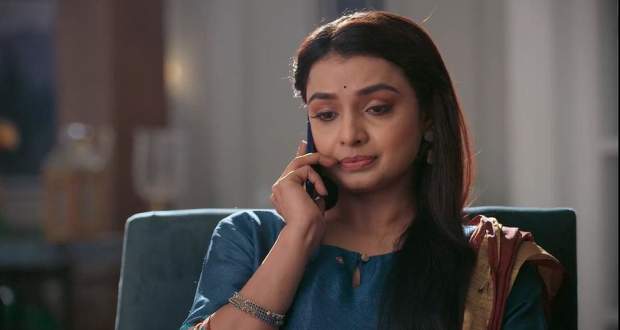 Today's Imlie 27th July 2022 episode starts with Cheeni making fun of Girish while he threatens to slap her if she doesn't shut up.

However, Cheeni tells him that Imlie will soon come to save her.

Malini learns that Girish is still in Pagdandiya and decides to go there herself to bring Aryan back.

Back in Pagdandiya, Chini is about to get a hold of the knife but Girish throws it away and is about to slap her when Aryan kicks open the door.

Chini rushes to hide under the table while Aryan fights with Girish and keeps Cheeni safe.

However, Chini is annoyed that Aryan is addressing her as 'Sugar'.

Back in Delhi, the Rathore family is about to have lunch when Malini comes there and says that she just came there to ask them how they are holding up.

Narmada stops Arpita from rudely talking to Malini and tells her to join them for lunch.

Malini adds poison in Dal and passes it around but Jaggu accidentally hits the Dal bowl with a ball and throws it away.

Meanwhile, Aryan interrogates Girish but he manages to escape from there without giving up Malini's name.

Imlie bumps Girish on the stairs and is about to go after him but remembers Cheeni and runs to find her in the hotel.

Girish informs Malini that some tough guy beat him up and took Chini from her which Malini finds annoying.

She tells Girish that he is on his own from now on and disconnects the call.

Back at the hotel, Aryan talks to Cheeni and feels a weird sense of being with Imlie and Gudiya which confuses him.

Aryan asks her name and just before Chini can tell him, the police come there.

The police thank Aryan and take Chini with them to Imlie.

However, Chini informs her that the police didn't save her but a hero did and takes her upstairs to meet him.