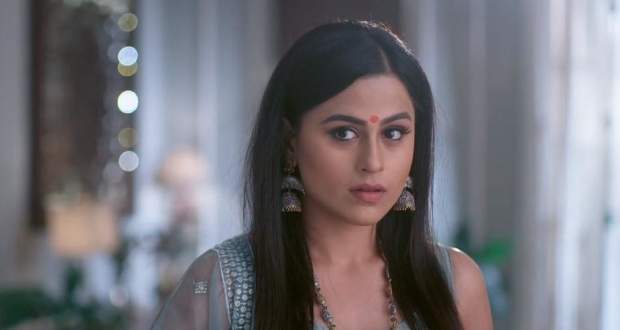 Today's Imlie 27th June 2022 episode starts with Aryan trying to make it up to Imlie and trying to kiss her unknown that it is Sundar in disguise.

However, in reality, Imlie stands at the door while Sundar signals her to change places and ducks under the bed.

Imlie goes inside the bed from the other side and acts as getting out of under the bed.

Aryan helps Imlie up and reveals to her that he got stuck at the police station as someone had framed him for the fire in Madhav's apartment.

Imlie tells him that she believes him which surprises Aryan and he questions her why she didn't ask for any evidence.

Imlie just looks into his eyes and tells him that she doesn't need any evidence to trust him.

Later, Keri is in the kitchen while Jyoti comes there and is given a glass of lemonade to help with the hangover.

Jyoti asks Keri if she can trust her as she sharpens the knives while Keri earns her trust with her words.

Jyoti further tells her to dice Imlie into pieces and promises to give her gold amounting to the same weight.

Later, at the breakfast table, Keri brings pieces of Imlie (tamarind) and tells Jyoti that her work is done while laughing.

She leaves while Jyoti tells Harry to kill Imlie as everyone is right now.

Harry confronts Imlie and shows her the knife while Imlie tries to stop him from attacking and shouts for Aryan.

However, Harry covers her mouth and attacks her requesting her to die as Jyoti will not leave him otherwise.

Elsewhere, Aryan gets worried for Imlie and decides to bring her there while Jyoti stops him and stalls him.

Jyoti acts as falling and requests Aryan to take her to the hospital.

However, Aryan tells Sundar to do it which makes Jyoti say she's fine now.

Back in the room, Imlie and Harry attack each other while Aryan is going towards the room.

Just then, Aryan hears Imlie's scream and gets worried.