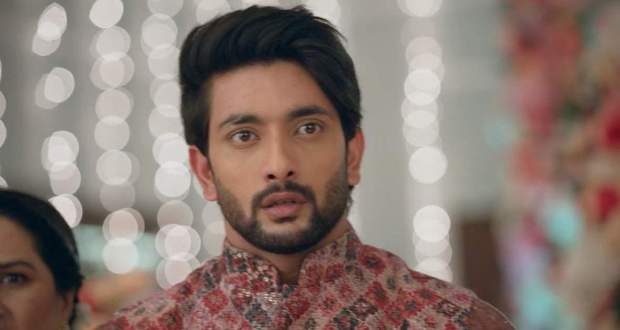 Today's Imlie 27th May 2022 episode starts with Imlie bowing to laddu Gopal while she notices looks at the little children outfits and holds them while crying.

Later,Imile thinks of uplifting everyone's mood and stops her tears.

Meanwhile,Kaveri asks Imlie to join her for a visit to a Babaji who fixes women like her.

Imlie says that these people are frauds while Kaveri blames Imile for not being able to take Aryan's family further.

Meanwhile, Aryan arrives while Imlie covers up and leaves to visit the occult.

Later, Neela and Gudiya accompany Kaveri and Imlie and smirk as Imlie enters the occultist cottage.

Meanwhile, Imile feels awkward as she thinks that this baba is a fraud and should teach him a lesson but is bound for the happiness of his family.

Later the occultist calls Imlie a bad soul but will fix it if she gives a donation to the Baba.

Baba asks Imlie to sacrifice her blood to be a mother and cut her hand with a big knife and fill the bowl with her blood.

Imlie stands up agitated and calls the baba a fraud man who plays on people's emotions.

Meanwhile, Neela calls Imlie a selfish woman and suggests Narmada to kick Imlie out and marry Aryan to Gudiya.

Later,Imile cries in the corner while a girl gives her a rose while her mother pulls the girl away or she might get Imlie's bad luck on the little girl.

Meanwhile, Kaveri scolds Imlie and takes Imlie on a guilt trip, and warns her to leave Aryan as she cannot be a mother.

Kaveri blames Imlie for getting separated from Aditya as he seemed to be a nice man and Imile must be at fault.

Later, Imlie is given two options to choose from and Imlie agrees to perform the ritual with tears in her eyes.

To download Imli all episodes or watch Imlie today's (27 May 2022) latest full episode, go to hotstar.com