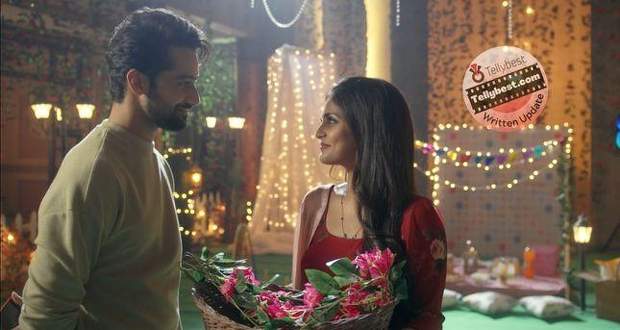 Today's Imlie 27th November 2022 episode starts with the family getting shocked while the recording of Imlie is heard.

However, the shopkeeper clarifies that he is talking about the person who is coughing and everyone gets confused.

Imlie recalls running to Cheeni due to her coughing, and thanks the shopkeeper for helping.

Once the shopkeeper leaves, Rudra and Atharva question Cheeni as to why she did such a thing and if she even likes Imlie or not.

However, Cheeni once again does her emotional drama and tries to lure her into forgiving her by lying that she is forgetful and must have said the wrong thing to the shopkeeper.

When Imlie doesn't say anything and just looks at her, Cheeni brings more tears to her eyes and leaves from there saying that she is shocked to see the doubt in Imlie's eyes.

Further, Rudra tells Devika that they have to make Cheeni leave the house at any cost and form a plan.

Elsewhere, Anu arrives at the Rathod house to get more clothes for Cheeni but gets insulted by Rupali and Arpita.

Rupali says that they are going to bring Cheeni back home the next day.

Back at Rana's house, Atharva comes to sit next to Imlie, and she thanks him for trusting Cheeni just the way she trusts her sister.

Atharva holds Imlie's hand and brings it to his chest where his heart should be telling her that his heartbeat is like music for him.

He looks into Imlie's eyes and tells her that his heart trusts her.

Afterward, Imlie goes to Cheeni and consoles Cheeni who acts in front of her and gains Imlie's support and sympathy.

The next day, Rana's family is busy with their work while Cheeni tells Imlie that she was tossing and turning all night thinking about what happened.

However, Rudra comes there and informs Cheeni to pack her bags since she needs help after seeing the forgetfulness she had the previous day and has already called the treatment center.

© Copyright tellybest.com, 2022, 2023. All Rights Reserved. Unauthorized use and/or duplication of any material from tellybest.com without written permission is strictly prohibited.
Cached Saved on: Sunday 27th of November 2022 11:56:39 PMCached Disp on: Tuesday 6th of December 2022 02:10:31 PM