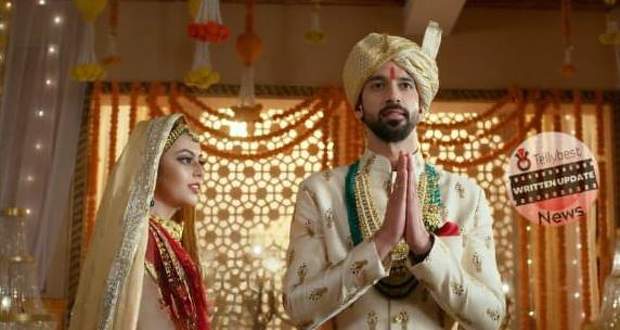 Today's Imlie 27th October 2022 episode starts with Atharva requesting the MP bodyguards to put down their guns but they inform him they are from his side only.

The bodyguards do not listen and Atharva slaps one of the men and they get angry.

Mr. Shukla runs into the room and orders his men to go out of the room.

In the basement, Rudra accuses Cheeni of marrying Atharva for money, not love.

However, he tells Cheeni that he will never agree to their marriage and will break her stubbornness.

Cheeni replies that this is her power of love, not stubbornness while Rudra promises her that she will never go on any vacation with Atharva.

Rudra stands behind the money suitcases and asks her to choose the coin or money.

Cheeni picks up the money bags and turns to walk out but Rudra stops her.

He tells her to remove the gold hierarchical bangles and insults her saying that her wrists have made them dull.

Rudra orders Cheeni to change her to previous clothes as only the bride wears the bridal lengha.

However, Cheeni confronts him for doing all this to her but he warns her to stay away from Imlie and Atharva.

Later, Cheeni meets Imlie who takes the bags out of Cheeni as she wants her to go with her to the mandap.

Suddenly Anu enters and takes the bags from Imlie’s hands and sends her away because she wanted to talk to Cheeni.

In the mandap, Rudra gives the gold bangles to Imlie and she looks at them in shock as she doesn't remember removing them.

On the other hand, Anu scolds Cheeni for being stupid and accepting Rudra’s money and conditions.

Anu calls her disgusting and Cheeni declares that she will take her revenge on Imlie and Rudra.

Outside the house, Anu instigates the MP bodyguards against Atharva.

In the mandap, Arpita stands between Atharva and Imlie with a mirror and tells him to remove Imlie’s ghunghat and see her face in the mirror.

Atharva gets scared and holds the ends of the dupatta reluctantly and starts to lift it gradually.

However, the bodyguard shoots a bullet into the mirror breaking it into pieces.

Atharva runs towards him but the bodyguard shoots a bullet at him.

Atharva sees the bullet and turns his body sideways and runs to grab the bodyguard's gun.

Rudra enters and tells the scared ladies to get aside while they yell at him to save Atharva.

Just then, one goon grabs Atharva, and the other points the gun at him when suddenly Imlie throws a burning stick at the bodyguard's hand.

The gun drops from the goon's hand but he furiously picks it up and shoots Imlie’s hand.

Seeing Imlie injured, Atharva runs towards her and screams “Cheeni” as he thinks the woman in bridal lehnga is Cheeni.

However, Imlie's dupatta flies from her face and Atharva looks at her shocked while her arm is bleeding.