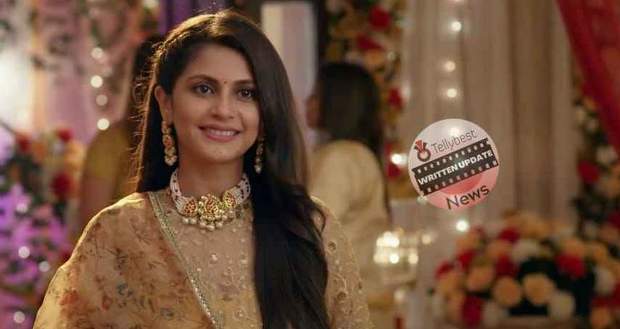 Afterwards, Parul takes Puneet and Imlie to her room and tells Puneet the truth as Imlie has advised her to make the foundation of the relationship strong.

Hearing Parul’s words, Puneet falls in love with her more and informs Parul and Imlie to keep the incident secret.

On the other hand, everyone is tense and thinks Puneet is going to cancel the wedding but Puneet comes and asks them to dance as it's his marriage.

Just then, Parul's in-laws inquire where did Parul go and when Parul is about to take Cheeni’s name Imlie lies to everyone and thanks Atharva for saving the day.

Hearing Imlie's words, everyone gets happy and Rudra's chest fills with pride while Cheeni is fuming at her defeat.

After some time, Rudra praises Imlie and she bends to take his blessings but gets shocked seeing his injury.

Imlie forcefully makes Rudra sit on a chair and puts haldi on the injury while Devika nods at Rudra and watches the scene with sheer happiness.

After the pheras, Parul and Puneet express their gratitude to Imlie and Parul bids goodbye to her family and leaves the house emotionally.

Afterwards, Narmada taunts Imlie for being the reason for Aryan and Imlie leaving this world like a bride leaves her house.

On the other hand, Atharva is sitting near Cheeni and he flirts with her but Cheeni puts on a facade of being a victim and shows regret for helping Parul run away.

Meanwhile, Cheeni tells about her belief in love and Atharva's heart jumps at her belief.

On the other hand, Rudra is admiring Imlie for Atharva and Shivani asks him if she should send a marriage proposal to Imlie.

At the same time, Atharva falls into Cheeni’s trap and assures her that he is going to keep the Parul incident a secret.

Meanwhile, Cheeni smirks and unaware Atharva falls in love with her thoughts on love and fearlessness.

The next morning, Imlie runs outside and picks up the newspaper but some water droplets fall on the newspaper from her wet hair deleting the content of the paper.

At the same time, Narmada snatches the Bhaskar Times newspaper from Imlie and accuses her of erasing AryLie's existence and blames her for bringing mourning into her house.

Glaring at Imlie, Narmada informs her that she will never let Imlie touch the property of AryLie.

© Copyright tellybest.com, 2022, 2023. All Rights Reserved. Unauthorized use and/or duplication of any material from tellybest.com without written permission is strictly prohibited.
Cached Saved on: Monday 21st of November 2022 02:38:19 AMCached Disp on: Wednesday 7th of December 2022 01:16:14 PM