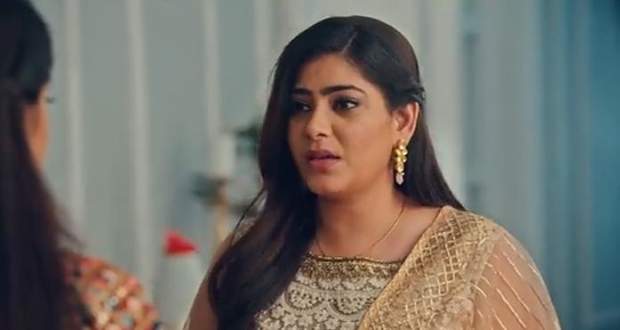 Today's Imlie 28th April 2022 episode starts with Aryan announcing everyone to come on the dance floor while Imlie thinks to go.

Aryan stops Imlie by holding her hand and drags her towards the dance floor confusing her.

Aryan tells Imlie to not interfere with Arpita's wedding anymore.

Imlie asks Aryan if she looks happy and Aryan describes how Imlie's face lights up when she smiles along with making the whole room shine too.

Imlie announces that she's not a part of the family as he said and leaves from there.

The dance ends and Neela announces that it's time for the engagement.

Arpita and Uday sit for the engagement but find one ring missing shocking them and making them worried.

Meanwhile, Imlie has the ring in her hand when she gets a call and leaves the house in frustration.

Aryan also calls a jeweler and offers him double money while telling everyone that the rings are okay and coming.

At the bus station, Imlie stops Sundar and tells him that he cannot stop pursuing his love for Arpita and leave in the face of hurdles.

Just then, she sees an elderly couple and recalls that they were the same ones whom Uday had pushed.

Imlie asks the lady if she remembers her when the lady says that they were begging for love and not money.

Later, the second ring arrives and Arpita and Uday are about exchange rings when suddenly the lights go out.

Imlie's voice is heard that she brought people from the groom's side and reveals that the elderly couple is Uday's parents.

Uday refuses to acknowledge his parents and says that they are just greedy people who want his money.

However, the lady's story reveals to everyone that Uday has kicked them out of their own house after they named it to him.

Imlie demands Uday apologize for the way he acted with his parents.

However, Uday instead calls Imlie an ugly leech.

Uday is about to raise his hand at Imlie when suddenly Aryan comes there and stops him in time.