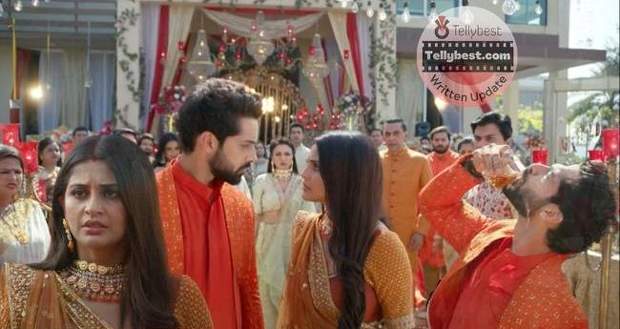 Today's Imlie 28th December 2022 episode starts with Atharva asking Devika if she does not see his pain.

He tells her that he is going to the funeral of his love by attending Cheeni's engagement.

However, Devika reminds him that Imlie's heart is broken too and tells him to at least take inspiration from her bravery.

She picks it up and tells Atharva to give his shirt while pulling out a sewing kit from the drawers.

She sews the button onto the Kurta while Atharva tells her not to be nice to him.

Imlie leaves saying that she cannot do so many things for him and leaves.

Later, Atharva and Imlie arrive at Cheeni's engagement while the guests mistake them for the groom and bride due to their matching outfits.

However, Cheeni and Abhishek come there and joke that they are the real bride and groom.

They start dancing while Atharva goes to the bar and starts drinking.

Akash goes to him and tries to stop him saying that he is drinking in front of Rudra.

Atharva says that all this is happening because of hiding things and says that he will celebrate in front of everyone today.

He continues drinking and takes over the music system as he announces himself as DJ and says that he will now play a song dedicated to Hookline and her lover.

Everyone starts dancing while Atharva continues drinking and stumbles into many people.

Imlie takes him away and scolds him while he tells her that she should call him only Arto as he's empty with love, friends, and other things.

Imlie angrily says that she is also bearing the pain of his mistakes.

Atharva apologizes while Imlie cuts him in between and tells him that he must be an artist in his concerts but at this moment both of their families are in pain.

Imlie leaves warning Atharva that she will not leave him if Rudra's health gets worse.

Cheeni sees them and feels thankful that Imlie's save-everything-even-if-i-die attitude saved her engagement from being ruined.

The guests talk about Atharva while Sundar comes there and distracts the guests with food.

Further, Sundar comes to check up on Imlie while she hides her pain and tells him to continue the engagement ceremony.

Cheeni and Abhishek exchange rings while Arpita tells Rupy that she sees love and honesty in Abhishek's eyes for Cheeni.

However, Rupy asks her what she sees in Cheeni's eyes which silences Arpita.

Cheeni and Abhishek dance while Atharva feels his heart breaking as he recalls his moments with Cheeni.

Imlie also recalls her marriage with Atharva and feels upset.

© Copyright tellybest.com, 2022, 2023. All Rights Reserved. Unauthorized use and/or duplication of any material from tellybest.com without written permission is strictly prohibited.
Cached Saved on: Wednesday 25th of January 2023 09:01:02 AMCached Disp on: Monday 6th of February 2023 05:05:38 AM