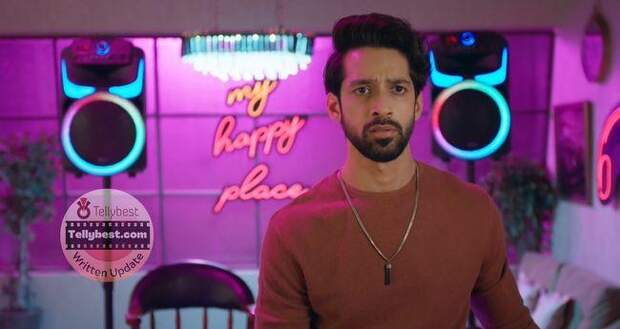 Today's Imlie 28th January 2023 episode starts with Imlie praying to Sita Maiyaa and asking how she can handle such big problems.

Just then, she gets a call from Rudra who asks her if she has reached the restaurant or not.

Imlie lies and feels guilty as she tells Goddess Sita Maiyaa to send her strength.

Imlie stands up and is about to walk away when she sees Rudra and gets shocked.

Back at the restaurant, Cheeni opens the gifts and gets excited seeing the jewelry while she starts her drama with Atharva about loving him for real.

However, just as she puts her hand on Atharva's, he removes it as he states that he didn't know he bought gifts that spoke so much to her.

Cheeni laughs as she calls him funny and says that just like the ring's shine, she can see his love for her shine through his cute anger.

Back at the temple, Imlie stops Rudra from interrupting Atharva and Cheeni's date and reveals to him that she herself sent them.

Rudra asks her if she's ignoring the truth and tells her to realize that she and Atharva are made for each other.

He tells Imlie that he won't let Atharva make a mistake by choosing Chini.

Back at the restaurant, Atharva acts rude to Cheeni while she tries to justify herself stating that she knows he loves him because he gifted her and people only give gifts to people they love.

Atharva mocks acts as if he understood her and questions her about how he should believe that she loves him.

Before Rudra and Imlie's argument can escalate, they get interrupted by a married couple who request her to click their picture.

Imlie happily clicks their picture and recalls her marriage while she congratulates the couple.

Further, Imlie comes back to Rudra and tells him that she became Atharva's partner but maybe she is not destined to become his life partner.

Rudra tells her that he is sure Cheeni is not in love with Atharva and he will not let Atharva make the mistake of choosing Cheeni again.

Back at the restaurant, Cheeni asks Atharva if he does not want to be happy with her.

He stands up from the chair and states that he does not want to make Imlie's smile disappear.

Cheeni tries to manipulate Atharva by saying that Imlie will be able to move on only after they get together but Atharva does not get fazed by it.

Using another tactic, Cheeni agrees with Atharva's words and tells him that she only has him while Imlie has both families to worry about her.

Elsewhere, Imlie worries about the family when she falls from the small cliff and gets injured.

She imagines Atharva coming to save her but gets out of the dream and starts walking as she states that she can take care of herself.

At the restaurant, Cheeni orders for both of them while Atharva smiles realizing that his favorites have changed.

He further tells Cheeni that he'll call Imlie to ask how she is and Cheeni agrees as she goes away with an excuse.

She clicks a pic of Atharva smiling as he is talking about Imlie and sends it to Imlie.

Further, Atharva calls Imlie telling her that they should go together but Imlie refuses as she cannot wait for him in the middle always and has left for home already.

While Imlie is on her way back home, she runs into Abhishek who offers to drop her home.

Abhishek talks happily about how Cheeni has agreed to meet him while Imlie wonders how heartbroken he will be to learn the truth.

© Copyright tellybest.com, 2022, 2023. All Rights Reserved. Unauthorized use and/or duplication of any material from tellybest.com without written permission is strictly prohibited.
Cached Saved on: Saturday 28th of January 2023 11:55:02 PMCached Disp on: Tuesday 31st of January 2023 07:05:07 PM