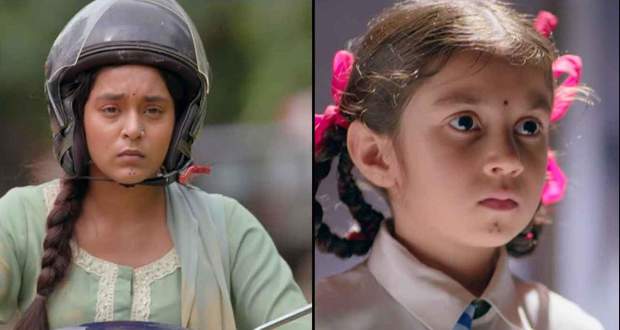 Meanwhile, Aryan hears the sound of an anklet and feels Imlie's presence as he pulls out his wallet and brings out Imlie's anklet from it.

He recalls the moment when he confessed to Imlie that he kept it with him before they went to Pagdandiya and were already in love with her.

Imlie also takes one of Aryan's handkerchiefs saying that she will keep it as a memory of him while he laughs at her.

Back in present, both Aryan and Imlie feel each other's presence as she knocks on his door.

However, as Aryan opens the door, Imlie turns to talk to the doctors while Aryan gets an untimely call from Malini.

Malini argues with Aryan on call demanding him to return to Delhi but he refuses saying that he won't return until he destroys the village's news channel.

Cheeni tries to drag Imlie towards Aryan but she stops her saying that they shouldn't disturb the hero as he's on a call.

Imlie also feels Aryan's presence in the room and tells Chini that they should thank Sita Maiya while the hero is busy.

Meanwhile, in Delhi, Anu tells Malini that she should get married to Aryan so that she has a right to stop him but Malini says that she doesn't need to get married to him to stop as she already has a plan ready.

Back in Pagdandiya, Imlie and Chini reach the temple while Imlie recalls when she first visited the temple and how the people stopped her.

In the present, the same people come once again and demand Imlie to leave while Chini tries to speak up for them.

However, the man pushes Imlie and tells the other guys to throw them out of the house.

Elsewhere, Aryan is at the news channel office and demands to know the identity of the independent reporter who covered Binni's case but is refused the identity.

© Copyright tellybest.com, 2022, 2023. All Rights Reserved. Unauthorized use and/or duplication of any material from tellybest.com without written permission is strictly prohibited.
Cached Saved on: Thursday 24th of November 2022 07:01:33 AMCached Disp on: Saturday 3rd of December 2022 01:50:02 PM