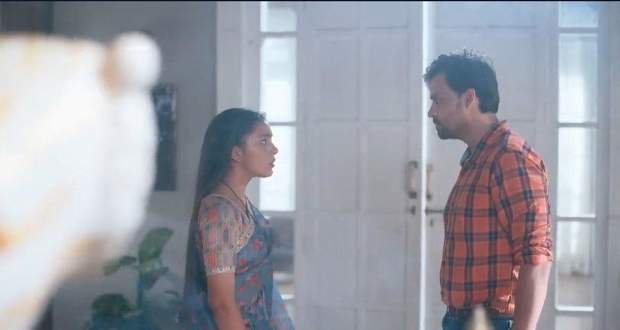 Today's Imlie 28th June 2022 episode starts with Harry rushing toward Imlie with a knife to kill her.

Harry says he does not want to kill Imlie but has no choice but to do it for his own safety from Jyoti.

As Harry swings the knife towards her, Imlie dodges his attack making Harry stumble and fall out of the window.

Aryan and others hear a loud thud and discover Harry on the floor after running toward the sound.

Imlie also comes down and joins the others while they call the doctor for Harry.

Later, Jyoti sits beside a half-conscious Harry and instructs him to declare that Imlie was the one who pushed him out of the window.

However, as Harry extends his hand to point out Imlie, it falls down with him fainting.

The doctor declares that Harry has suffered internal injuries from the fall which has led to his body getting paralyzed.

Aryan takes Imlie aside and asks if Harry was there in their room to which Imlie reveals about Harry’s attempt to kill her.

Before Aryan blasts off in anger, Imlie asks him to trust her on this matter as she is sure that Jyoti is the one behind all happenings.

Aryan cooperates with Imlie and joins hands with her while agreeing to believe in her.

Imlie explains how Madhav has been attacked three times and asks him to reveal Jyoti’s hands behind all.

However, Madhav declares that Jyoti is not involved with anything that has happened to him which triggers Aryan’s patience.

Aryan does not listen to any further comments by Imlie and announces that he considers Madhav as his official enemy from now on.

Later, Imlie converses with Jyoti as Keri and proposes that she will kill Imlie for Jyoti the next day.

Seeing Aryan in a trance, Keri proposes to bring black coffee for him and entertains him with her humor.