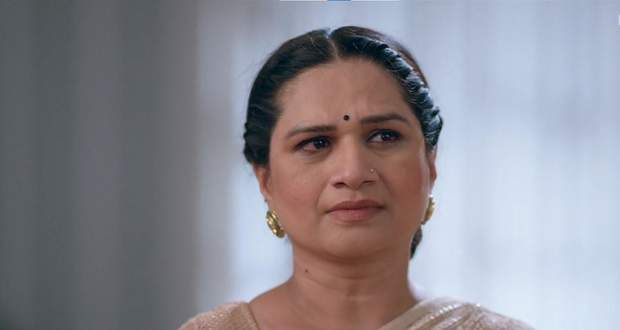 Today's Imlie 28th May 2022 episode starts with Imlie going back to the priest while Neela and Gudiya talk about the possibility of her doing the ritual.

The occultist hands Imlie the knife to make the cuts on her hand.

Elsewhere, Aryan returns home and learns from Arpita that Imlie and Narmada have gone to the temple with Neela and Gudiya.

Imlie starts doing drama and asks the occultist to make the cut when Narmada scolds Imlie.

Back at the Rathore house, Arpita asks Aryan if he's fine and he says that he is worried for Imlie as they didn't plan anything and so much happened.

Just then, Aryan gets a call and runs out of his house worrying Arpita and Sundar.

Meanwhile, Imlie tells Narmada that she feels guilty to give them such pain while Neela takes the knife and drags Imlie saying that she has to do the ritual and give Rathore house an heir.

However, Aryan comes there and stops them after which he argues with Narmada for believing in such superstitions.

Narmada says that he has no right to shatter her hopes after which Aryan picks up the knife and says that he will shed blood in place of Imlie.

Narmada stops him and worries for Imlie while an annoyed Neela taunts Imlie.

However, Aryan retorts back to Neela and thanks Jyoti for informing him of this.

Jyoti, who has appeared out of nowhere, tells Aryan that it was the right thing to do.

Aryan leaves with Imlie and tells Jyoti to bring the rest of the family home.

Later, Aryan and Imlie have an emotional moment while Imlie reveals her feelings about how her dreams of becoming a parent got shattered.

She reveals that she fears he might not find her the perfect partner in the future which anger Aryan but he calms himself and tries to comfort her.

Aryan makes her sit and writes in a new diary that he will never leave Imlie even after bearing all of her weird habits.

Imlie gets better and signs the deal with him in the end.

Aryan holds Imlie's hands and tells her that they might face difficulties in the future but that he will never leave her.

To download Imli all episodes or watch Imlie today's (28 May 2022) latest full episode, go to hotstar.com