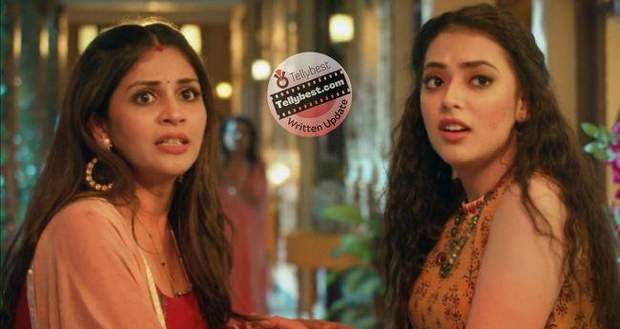 Today's Imlie 28th November 2022 episode starts with Rudra saying that Cheeni's health condition is worsening and that they need to send her to the best treatment.

Atharva and Imlie argue with Rudra while he looks at Cheeni and says that he is not blaming her, but her condition.

Cheeni gets anxious while Rudra persuades the family members by talking about how Cheeni can also go to jail if she does not get treated for it.

Just then, the Rathod family comes there and gets surprised to see the whole family there.

Imlie informs them about the recent activities and the whole drama with the balloons and Cheeni.

Rupali comes forward and apologizes to Rudra while announcing that she is going to take Cheeni with her back.

Keya tells her husband that they need to stop Cheeni from leaving and he tells her that Cheeni is getting what she deserves.

Rudra tells Sundar and the rest of the Rathore family that at this moment in time, they need to send Cheeni to the treatment center as she is most dangerous to herself.

Further, Sundar agrees and the nurse takes her away while she keeps requesting Imlie to do something.

However, Imlie is helpless as she tells Cheeni that she will bring her back soon.

Cheeni gets taken away while Imlie goes to the temple and prays for her sister while blaming herself for everything.

Atharva looks at Imlie and thinks that it is his fault since he couldn't confess the truth and support Cheeni in front of everyone.

Meanwhile, at the hospital, the warden gives instructions to her and leaves keeping the tray of food near the table.

However, she flings it to the ground and angrily thinks about how she was taken away from there and brought to the treatment center.

Back at the Rathod house, Anu fights with Rupali and accidentally reveals Cheeni's plans at the Rana house which angers Rupali.

She tells Anu that it is good Cheeni went to the hospital while Anu leaves saying that she will talk to her granddaughter herself.

Anu calls Cheeni who informs her that she has already formed a plan to get the position of Imlie at the Rana house permanently.

Anu praises her and then disconnects the call thinking that Cheeni truly is Malini's daughter.

On the other hand, Imlie feels upset thinking that Cheeni is in the treatment center because of her while Atharva comes there with a cup of coffee for her.

He sits beside Imlie and explains to her that Cheeni needs medical help from professionals and that they cannot do anything but be supportive of Cheeni.

Imlie smiles as she tells Atharva that she hopes Cheeni also gets a life partner like him.

© Copyright tellybest.com, 2022, 2023. All Rights Reserved. Unauthorized use and/or duplication of any material from tellybest.com without written permission is strictly prohibited.
Cached Saved on: Wednesday 25th of January 2023 11:12:18 AMCached Disp on: Thursday 2nd of February 2023 09:19:37 PM