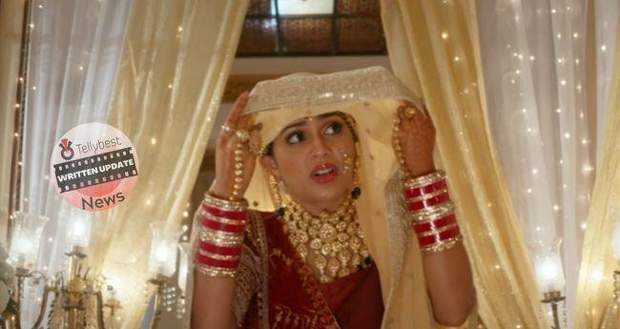 Cheeni shows fake worry for Imlie and asks her if she’s okay.

Seeing Cheeni’s injured leg, Imlie asks about her injury and Cheeni tells that she slipped from the stair when the goons shot her.

However, Atharva saw Cheeni falling so he screamed her name in freight.

Later, when Cheeni is walking in a secluded corridor Atharva pulls her into a corner.

Atharva confronts Cheeni for not standing beside him in bridal lengha while Imlie puts her life at risk for him.

However, Cheeni holds Atharva's hand and takes him to tell the truth to everyone.

Atharva stops her while Cheeni says she will lose her mother’s share if she marries him.

Cheeni lies to Atharva that she told the truth to Imlie and accuses Imlie of blackmailing her using Rathore's name.

However, Atharva refuses to believe Cheeni as Imlie took a bullet for him.

Cheeni gets shocked seeing the amount of trust Atharva has in Imlie so she tries to make up accusations about Imlie.

At the same time, Anu enters and tells Atharva that Imlie was never in danger as she planned the whole bullet incident to gain his sympathy.

Downstairs, the MLA and his bodyguards apologize to Imlie and she forgives them after giving them a lecture on humanity.

Imlie gives the bodyguards a bundle of cash to compensate for their injuries.

At the same time, Atharva sees Imlie giving them the money from the balcony and looks at her in shock.

Meanwhile, Anu recalls calling the police on MLA bodyguards and taking them to Imlie intentionally so they can apologize to her while Arto misunderstands the situation.

Cheeni walks to Arto emotionally and talks about Imlie double face and hunger for money.

Atharva believes her and says Imlie can take advantage of her innocent nature but now he will save her from Imlie.

He confesses his love to Atharva and hugs Cheeni tightly.

Later, Imlie and Atharva meet midway in a corridor and she asks about his health after the bullet incident.

However, Atharva says he is perfectly okay as he is different (He copies Cheeni's dialogue "Cheeni is different" because he thinks Cheeni and his thinking are similar).

Imlie gets confused hearing Cheeni’s dialogue from him.

Confused, Imlie asks Atharva if he really wants to do this marriage with her.

However, Atharva indirectly says he will give everything to his life partner, and walks away.

Not realizing the hidden meaning behind Atharva’s words, Imlie gets happy but she also senses some questions in his eyes.

Afterwards, Imlie and Atharva take pheras and Cheeni holds Atharva's hand when he is taking too much time in putting the varnamala.

Cheeni looks at Rudra and helps Atharva put the Varnmala in Imlie's neck while Atharva looks at her in shock.

When Cheeni binds the Atharva and Imlie’s dupatta Cheeni thinks that she is binding her life with them.