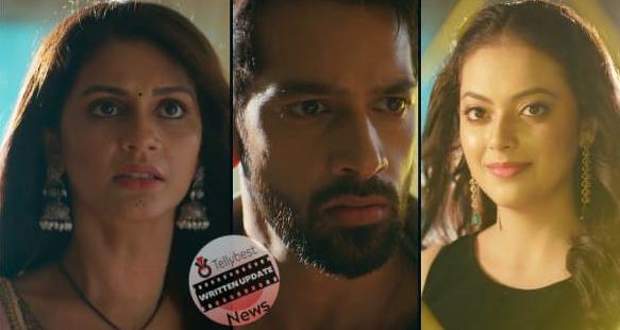 Sundar praises her writing skills but Imlie gets scared and closes the room's door and requests him to keep the truth of her poems getting published in the newspaper a secret.

However, Sundar brings a bundle of newspapers containing all her poetries and his actions touch her heart.

Meanwhile, Imlie comments that no one reads her poems other than him.

At the same time, Atharva is reading Imlie’s poem and compares the poems to his emotions towards Cheeni and thinks she is Miss Shayara (Imlie's anonymous name).

On the other hand, Imlie is clicking a selfie with Sundar and the newspaper but Arpita and Rupi interrupt them.

Hiding the newspaper behind her back, Sundar stutters while Arpita accuses Imlie of not telling her the truth.

Arpita snatches Imlie’s mobile phone and scolds her for using the old phone and both Sundar and Imlie heave a sigh of relief.

Later, Imlie takes Cheeni to market and buys her a new phone while she herself end up taking Cheeni's old one.

Meanwhile, Cheeni calls her stupid in mind and smirks after taking advantage of Imlie’s naive nature.

Afterwards, Rupi finds out that Cheeni bought a new phone instead of Imlie but Anu confronts Rupi for supporting Cheeni and not getting happy at her happy moments.

However, Anu accuses Imlie of Malini’s demise but Rupi says she will not let Cheeni become another Malini.

At the same time, In Arto’s room, Devika enters happily and praises Atharva for making his father proud.

However, a gloomy Atharva informs Devika that his father does not give him enough respect for his profession and career.

On the other hand, Rudra and Mahesh (Parul’s Father) visit Rathore's house and meet Narmada.

In Rana's house, Atharva asks his siblings to find out about Cheeni’s whereabouts and calls one girl and asks for another girl's number who was present at Parul’s wedding.

After many calls, Atharva calls Imlie and asks if he knows Imlie (he only knows Imlie’s name but he is searching for Cheeni) but Cheeni snatches her phone and cuts the call.

Meanwhile, Atharva’s siblings make fun of him but he exclaims when he will find the unnamed girl (Cheeni) he will announce his love to the whole world.

© Copyright tellybest.com, 2022, 2023. All Rights Reserved. Unauthorized use and/or duplication of any material from tellybest.com without written permission is strictly prohibited.
Cached Saved on: Monday 21st of November 2022 07:11:07 AMCached Disp on: Monday 5th of December 2022 01:08:47 AM