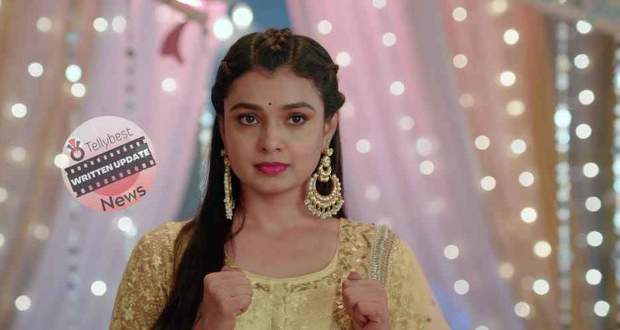 Today's Imlie 29th August 2022 episode starts with Imlie and Aryan reaching the phone’s location and finding the phone lying on the sidewalk.

Meanwhile, Aryan sees the tire prints on the mud and informs Imlie that the kidnappers just left the location.

Aryan and Imlie rush to the car and follow them.

On the other hand, Narmada, Arpita, Sundar and Jaggu are praying for Cheeni’s safety while Anu taunts them for praying for a thief.

Meanwhile, the kidnappers' car stops abruptly due to some malfunction in the engine and AryLie's car stops in front of them.

However, Aryan asks them about Cheeni by showing her photo but the kidnapper lies and rushes to their car.

Imlie sees Cheeni’s hand on the window and screams her name.

At the same time, Malini's phone gets broken by Jaggu while she is calling the kidnappers to alert them about AryLie.

However, Malini accepts Neela's request to get Preeta married to Aryan.

Meanwhile, AryLie furiously follows the kidnapper’s car and curses at them for kidnapping Cheeni.

The kidnapper speeds up their car while Aryan chases the car trying to pass the car.

However, the kidnapper drifts the car and takes a U-turn.

Shocked, AryLie sees Cheeni screaming at them to save them from the window.

Aryan and Imlie's hearts get shattered into pieces when the kidnapper's car loses control and falls down the small hill.

Imlie gets frozen seeing the car turned upside down while Aryan frantically runs to save Cheeni.

However, Aryan finds a piece of Cheeni cloth only and yells at Imlie to help him find Cheeni.

Seeing Imlie frozen, Aryan holds Imlie's face and promises her that he will save Cheeni.

However, Imlie says she doesn’t want to lose her family again and starts to find Cheeni with a determined heart.

In Rathore's house, the pooja thali falls and the family members get anxious about Cheeni’s safety.

Arpita assures Jaggu that AryLie is going to save his sister.

Meanwhile, Imlie and Aryan hear Cheeni’s screams for help and rush to her.

Cheeni is standing below a bridge and Imlie starts to jump down but Aryan stops her.

Meanwhile, Aryan recalls Imlie's accident and orders her he is not going to let her put her life at risk.

Aryan brings a rope and Imlie goes down with the help of the rope.

However, Cheeni gets dizzy and starts to fall but Imlie holds her hand worriedly and hugs her daughter.

© Copyright tellybest.com, 2020, 2021. All Rights Reserved. Unauthorized use and/or duplication of any material from tellybest.com without written permission is strictly prohibited.
Cached Saved on: Saturday 1st of October 2022 10:38:36 PM