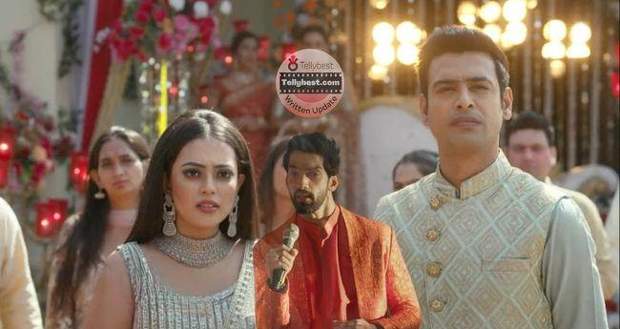 Today's Imlie 29th December 2022 episode starts with Cheeni and Abhishek talking to each other on call while she tells him that he is the most important person to her.

He tells her to always be honest and asks her if she is happy.

Cheeni tells him that she got what she wanted while he tells her a joke to lighten the situation.

Cheeni hears the elders talking and tells Abhishek that she'll talk to him later.

Cheeni asks the elders if they are talking about her ring and they scold her and tell her that she should think about the happiness shining in Abhishek's eyes instead of the shine of the diamond.

Cheeni argues with Rupy, Arpita, and Sundar while they all scold her telling her that she should accept her mistake from the heart.

Cheeni goes to her room angrily while thinking that Imlie should get to hear her part of the taunts too and calls someone.

Meanwhile, at the Rathod house, Devika and Shivani try to put a drunk Atharva to bed while he keeps on saying that he does not want to get sober as he'll have to face reality then.

Atharva cries saying that no one is talking to him, not Cheeni, not Imlie, and not even Rudra.

Devika goes away and cries while Shivani puts Atharva to sleep.

Further, Shivani comes to Devika and complains about how Imlie is being unfair and rude to Atharva when he is apologizing to her and accepting his mistake.

Shivani says that Imlie should know her duties as Atharva's wife and should accept that the world won't change its mentality with only her.

However, Devika says that Imlie won't make any compromise and is about to argue with her when Atharva falls from the bed.

They both rush to him and feel that their heart is filled with sorrow.

On the other hand, Cheeni comes to Imlie's room and continues mocking her while fake praising her for handling the drunk Atharva today.

However, Imlie handles her calmly and tells her that she should talk about her future with Abhishek instead of wasting her time and coming to her to talk about something that does not matter to her anymore.

Cheeni is about to say something but seeing Imlie's glare, she starts stuttering and says that she came there to take some of the things she forgot.

Imlie leaves telling her to take everything of hers and not come back.

Once Imlie leaves, Cheeni says that Imlie intimidated her but it doesn't matter anymore as she will marry Abhishek and live away from this Imlie-Atharva drama.

Meanwhile, Imlie goes to Atharva's room to take her phone while she overhears Shivani talking about how both Cheeni and Imlie have ruined Atharva's lives.

Shivani says that she will find a girl for Atharva who will take care of him.

Just then, Imlie enters the room stating that she came to take her phone while Atharva holds her hand and begs her to help him.

Atharva gets on his knees and pleads with Imlie to help him move on as he will lose himself if she does not help him.

However, Imlie leaves while trying to keep her tears in control which refuses to stop as Shivani taunts that Imlie is heartless.

The next morning, Imlie throws water at Atharva and wakes him up while he asks her why she's doing that.

Imlie tells him to get ready and go to work while Atharva argues that he has nothing left to do that for.

Imlie tells him that she is doing this for herself as she can't not help anyone who asks her like how he asked her last night.

Atharva realizes what she is saying and tells her that her being there for Rudra is enough.

He again pulls the cover on himself while Imlie takes the covers and throws them away.

© Copyright tellybest.com, 2022, 2023. All Rights Reserved. Unauthorized use and/or duplication of any material from tellybest.com without written permission is strictly prohibited.
Cached Saved on: Wednesday 25th of January 2023 09:51:44 AMCached Disp on: Monday 6th of February 2023 05:05:01 AM