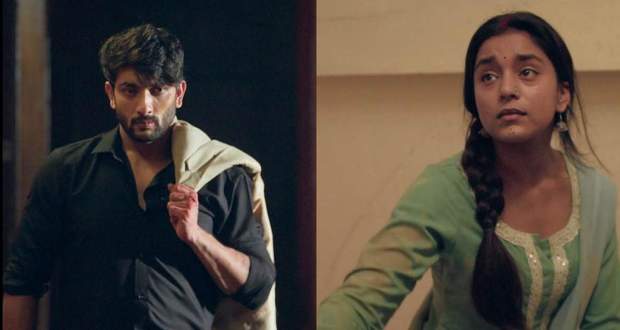 Today's Imlie 29th July 2022 episode starts with the villagers arguing with Imlie while she states that she won't create drama by going inside the temple.

Chini questions Imlie why she's not using Girl power to which Imlie tells her that they shouldn't create drama in a temple.

Imlie tells Cheeni that she can go inside the temple as only Imlie is banned from going inside.

Further, Imlie gets a call from Kamal who informs them about a man from the city demanding to meet her.

Imlie drops off Chini and goes to the office while Aryan waits for Imlie at the office.

Cheeni realizes that she has forgotten to bring Prasad and goes to the temple.

Elsewhere, Imlie's sandal breaks and she sits to fix it while Aryan gets impatient and leaves the office.

Later, Cheeni notices Aryan going into the car and runs to him thanking him once again for his help.

However, he scolds her and threatens to call her mother but Cheeni tells him to not do it in exchange for Prasad.

Further, Cheeni tells him that she knows everyone in the village while he requests her to make him meet with the reporter from Ujwalla Pagdandiya.

Not revealing that she is Imlie's daughter or her name, Cheeni tells him that she will take him there.

Meanwhile, at the office, Imlie learns that the reporter is from the Bhaskar times and worries thinking that it could be Aryan.

Back in Delhi, Anu holds a kitty party in the Rathore house and the ladies gossip about Aryan and Malini being a perfect couple while Anu spikes Narmada's drink and informs Malini about it.

In Pagdandiya, Chini learns that Aryan is there to fight with the reporter from Pagdandiya and blindfolds him before taking him to their house.

At the same time, Imlie learns from one of their colleagues that Cheeni is roaming around with a city man and gets angry.

She goes to look for him while she finds an expensive watch and thinks that it's from the guy from Bhaskar times.

At Imlie's house, Cheeni ties Aryan's hands to the bed and looks for something to feed him, and gets worried.

Meanwhile, Anu calls Malini and tells her to come as her part of the plan is done.