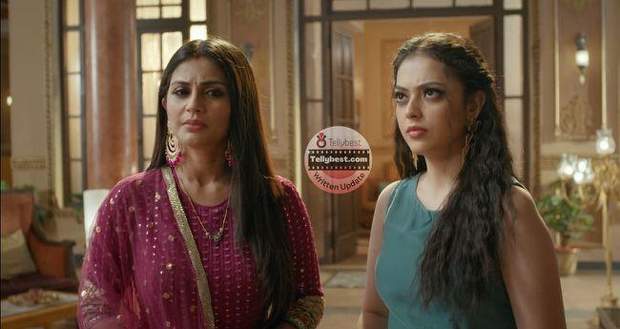 Today's Imlie 29th November 2022 episode starts with Atharva and Imlie talking to each other about Chini.

Imlie wishes that Chini would get a life partner like Atharva.

After hearing this he gets shocked and says that if he was as understanding as Imlie says, he would have understood the pain Chini was going through.

Imlie consoles him by saying if Atharva and Chini had a better relationship he would understand Chini more and Atharva did all that he could.

At the hospital, Dr. Bhairav takes Chini to his cabin where she steals his phone and tries to throw stuff at him like burning paper, phone, and other stuff.

On the other hand, Atharva tells Imlie to eat, she takes a bite and tries to feed him too but her phone rings.

Chini calls Imlie and tells her that the hospital is not safe for her and pleads to take her away from the hospital.

Atharva and Imlie rush out of their house and Rudra tries to stop them but they do not listen to them.

Rudra calls someone and makes sure that Atharva and Imlie do not get to the medical center.

Meanwhile, at the hospital, Chini smirks and tells the doctors that she has done her task and that now she can sleep nicely so they can inject her.

Atharva and Imlie leave via car, and she is intrigued by Rudra’s hatred towards Chini.

Rudra’s men see Atharva and Imlie driving and they put spikes on the road to make sure they do not go to Chini.

Atharva and Imlie’s car run over those spikes and Imlie balances both of them, she feels her heart falter for that moment when she had his hand in hers.

Meanwhile, Rudra gets a call from his men and asks if the task is done or not.

With confirmation, Rudra tells his men that he will pay them well.

Devika questions Rudra’s actions and asks him if he is not worried for his own son at all.

To this, he answers that nothing will happen to Atharva and Imlie as long as they are together.

Keya hears this and decides to intervene.

Atharva and Imlie come out to check the car and find that they had run over the spike.

Atharva gets angry and tells her that his dad has done this.

Imlie tries to lighten the mood and tells him that Rudra must have a solid reason to do this and we should go and find out the reason.

She even says that every relationship needs to have transparency but firstly they need to go to the hospital and look for Chini.

At the hospital, a nurse brings Chini her favorite dessert but Chini throws it and runs out of her room.

Atharva and Imlie walk in the jungle but she twists her leg and tries to hide it from Atharva.

Even after all her efforts, Imlie is not able to walk while Atharva tries to test her.

He asks Imlie to jump and she tries her best but stumbles in his arms.

© Copyright tellybest.com, 2022, 2023. All Rights Reserved. Unauthorized use and/or duplication of any material from tellybest.com without written permission is strictly prohibited.
Cached Saved on: Thursday 26th of January 2023 08:54:48 AMCached Disp on: Monday 6th of February 2023 06:21:50 AM