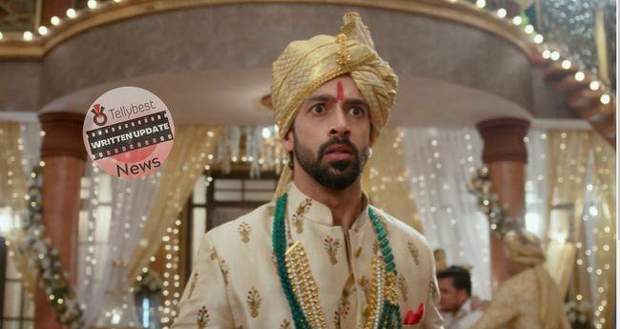 Today's Imlie 29th October 2022 episode starts with Atharva looking at Cheeni with longing emotion while Imlie looks at him with admiration.

Pandit Ji tells Atharva and Imlie to stand up for pheras.

However, Imlie stops Atharva and shows him that Cheeni’s dupatta is also bound in their gathbandhan.

Everyone gets shocked while Cheeni pretends to be shocked and apologizes to Imlie.

Cheeni tells Imlie to let the knot be as it's a bad omen to open the gathbandhan.

However, Imlie grabs the knot and compares the knot to their relationship problems.

Pulling out Cheeni’s dupatta from their gathbandhan, Imlie declares that she will solve every problem that comes in between her and Atharva’s relationship.

Later, Atharva and Imlie take pheras while Atharva looks at Cheeni with a sad expression.

Pandit Ji chants the promises and Imlie listens and repeats them in her mind.

However, Atharva blames god for snatching his first love.

Meanwhile, Cheeni thinks that Imlie will live like an outsider in Rana's house as Atharva does not love her.

She further thinks that Imlie will be Atharva's wife in front of everyone while being a stranger in his eyes.

The pheras finish and Atharva and Imlie sit in the mandap.

Atharva binds the mangalsutra on Imlie’s neck while Cheeni stands behind them gloomily.

He fills Imlie’s hairline with sindoor and tears drop from her eyes and their marriage gets complete.

Later, Atharva and Imlie go to take the blessing of the elder while Anu talks with Cheeni.

Anu taunts Atharva and Imlie’s marriage but Cheeni assures her that this marriage is different as Atharva is in her hands.

Cheeni tells Anu that Atharva will give his everything to their (Cheeni's and Atharva's) nameless relationship.

On the other hand, Manish and Divya (Atharva’s Chacha and Chachi) talk about Imlie being a bad omen for the Rana family.

Divya tells Manish that Imlie's parents died at her birth and goons shot bullets at her wedding.

However, Devika interrupts her and says Imlie has washed away all their bad deeds.

Devika says Atharva and Imlie’s kundali match and they are perfect for each other and take them to the hall.

In the hall, Arpita hugs Imlie requesting Atharva to take care of her as she is very innocent.

Rupi says that Atharva’s presence has changed Imlie as she is now more confident.

Crying Imlie goes to Meethi and she encourages her saying she is her father’s pride, mother’s chilli and the trust of the whole Rathore family.

Meethi hugs Imlie's teary eyes and Sundar hugs her emotionally as he had always treated her like a daughter.

Later, Narmada apologizes to Imlie for not giving her the love she deserved and blesses her.

Narmada tells Imlie that she is her last memoir of AryLie and wipes her tears.

Meanwhile, Arto goes to his room bored from all the crying while Cheeni finds Imlie’s poem she wrote in the diary.