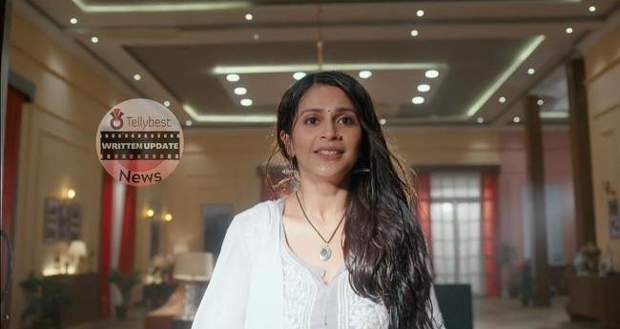 Today's Imlie 29th September 2022 episode starts with Rudra joining his hands and requesting Narmada to give her Lakshmi (Imlie) to him and asks for their daughter’s hand for Atharva.

Hearing Rudra's words, Anu smirkingly asks Rudra about the marriage proposal for Cheeni but gets shocked when he exclaims he wants Imlie to marry Atharva.

Just then, Narmada agrees to his proposal but Arpita takes her aside and requests Narmada to wait for Imlie but she refuses to do so.

Anu runs outside and informs Cheeni about Imlie getting a proposal from a big industrialist.

Walking towards Imlie, Cheeni crashes into Imlie and she falls into a mud puddle in her garden.

At the same time, Rudra and the Rathore family come out and Cheeni insults Imlie for playing in the mud.

Meanwhile, Rudra helps Imlie up and recalls Cheeni’s rude behaviour toward him at the wedding.

Hearing Rudra’s voice, Imlie cleans her eyes and greets Rudra and asks about his injury’s state.

Later, Rupi and Sundar ask Imlie to get ready while Narmada threatens her to not mess with this proposal.

However, Arpita and Rupi comfort Imlie and ask her to decide without any pressure.

On the other hand, Arto and his Bhabhi are talking about getting true love and Akash’s wife tries to show him her sister's picture but he refuses to see it as he only believes in true love.

Meanwhile, Arto wants to find out that his hook line (Cheeni) is his Shyra.

In Rathore’s house, Cheeni thinks of her dream of marrying a guy who will fulfil all her needs.

Later, Rudra is talking to Imlie softly while Cheeni acts to stumble and throws school documents in Rudra’s lap.

Reading Imlie's documents, Rudra finds out Imlie do not understand the English language and Cheeni narrates the whole story of Imlie living in the village for 10 years.

However, Cheeni's plans of breaking Imlie's marriage flop when Rudra gets excited at the piece of information.

He praises Imlie for knowing the pure Hindi language in the era of the English language and praises her kindness and soft-hearted nature.

Meanwhile, Rudra informs Imlie that he likes her for his younger son and puts his hand on shocked Imlie's head.

© Copyright tellybest.com, 2022, 2023. All Rights Reserved. Unauthorized use and/or duplication of any material from tellybest.com without written permission is strictly prohibited.
Cached Saved on: Monday 21st of November 2022 10:36:08 AMCached Disp on: Wednesday 7th of December 2022 01:15:47 PM