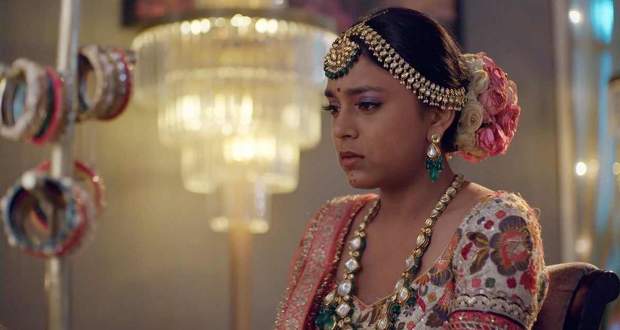 Today's Imlie 2nd April 2022 episode starts with Imlie walking away from her wedding. Meethi stops Imlie and questions about her actions.

Meanwhile, Arpita asks Aryan about Imlie and the conditions he was mentioning earlier.

Imlie confesses to Meethi that she doesn’t want to get married to Aryan. She also tells that Aryan doesn’t love her and that the marriage is for selfish reasons.

Meethi tells Imlie that Aryan is a perfect guy for her. She states that love is letting go of people and freedom. She tells her about Aryan's attempts of saving her in the past.

After listening to Aryan, Arpita contemplates that if Imlie doesn’t want the marriage to happen, then why did she complete all the pre-wedding rituals.

However, Neela wields this chance to compel Narmada about Gudiya replacing Imlie and save their pride and respect in society.

Suddenly, Gudiya appears out of nowhere and starts to beg for forgiveness. Neela tells how Gudiya loved Aryan from her childhood and uses guilt to marry them off.

However, Imlie returns to the Mandap and yells to stop Neela and Gudiya to proceed further.

Arpita feels relieved and hugs Imlie. Imlie asks sorry for making them worry about her and assures that she will not leave Narmada's side even for a minute.

Imlie proceeds towards the Mandap where Aryan is shocked to see Imlie return to him as she agrees to go through with the wedding.

Nonetheless, Imlie has only returned because Meethi forced her into it. Meethi asks Imlie to pay her off by tying knots with Aryan. Meethi demands Imlie get back to the Mandap.

Imlie feels heartbroken listening to Meethi as tears gush out of her eyes feeling devastated.

Imlie states that she will comply with Meethi with the condition that after the marriage Meethi is merely a person who gave birth to her but not their mother anymore.

Elsewhere, Imlie completes her last ritual of the wedding to circle the holy fire.

Neela's blood boils witnessing the marriage and starts cutting the rope of Mandap decoration atop where Imlie was placed earlier with a knife while Aryan saves Imlie in time.

The blood oozes out from his fingers staining Imlie's forehead.

Later, Aditya approaches the Mandap and witnesses the mess.

Neela gets back as if nothing had happened and feels concerned.