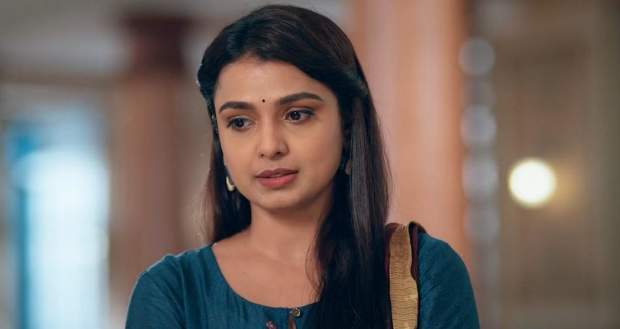 Today's Imlie 2nd August 2022 episode starts with Imlie thinking that the boy from the city cannot be Cheeni's friend while Aryan looks for Cheeni thinking of ways to help her.

Rajat lights the abandoned house on fire and leaves from there while Cheeni is still inside.

Elsewhere, Aryan and Imlie both hear Cheeni's shouts and rush towards the abandoned house that is on fire.

Cheeni cries for Imlie while Aryan barges inside and sees a panicking Cheeni surrounded by fire.

Using his quick wits, Aryan covers himself with a nearby shawl and goes to Cheeni while Imlie also enters the house.

Not seeing Aryan, Imlie puts out the fire with water, and both she and Aryan drag Cheeni outside unaware of each other's presence.

Once outside, all three stumble and collapse while Aryan and Imlie both notice each other and recall their past with each other.

They both stand up and hug each other tightly forgetting their last bitterness as Cheeni just stands there unknown of their past relationship.

Chini leaves while Aryan and Imlie both apologize to each other for their past mistakes and blame themselves for their separation.

Aryan asks her why she left him but she retorts in question asking why he didn't stop her.

As if Aryan has suddenly remembered the past, he suddenly removes his grasp from Imlie's hands and tells her that because of her, his dreams were crushed that day.

However, all turns out to be their imagination as they are still sitting on the ground with Cheeni looking at them with curiosity.

Chini notices the watch in Imlie's hand and informs Aryan about it.

Further, noticing the statue of Sita Maiyaa, Chini tells Imlie that she has gotten her goddess too.

After Cheeni exchanges the items, Imlie suddenly holds Cheeni's hand and leaves even though Aryan tries to stop her.

Later, Imlie is checking Cheeni's body for any injuries while Chini asks her why she cried seeing the city guy.

Further, Imlie talks to Cheeni who informs her about everything regarding her interaction with Aryan and his family on the video call including Malini.

Imlie fears them finding out that Cheeni is Gudiya while Aryan at the hotel also wonders what Imlie and Cheeni's relationship is.

Meanwhile, Cheeni recalls the taunts from people and asks Imlie about the name of her father.

© Copyright tellybest.com, 2020, 2021. All Rights Reserved. Unauthorized use and/or duplication of any material from tellybest.com without written permission is strictly prohibited.
Cached Saved on: Saturday 1st of October 2022 12:49:50 AM