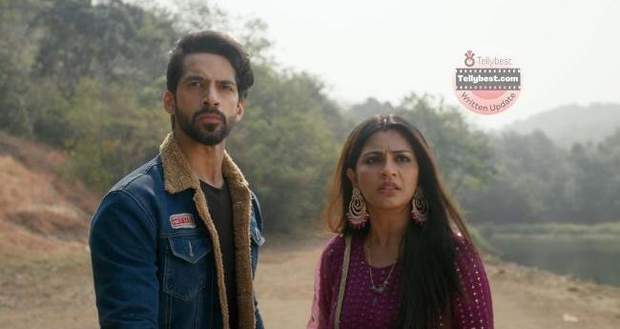 Imlie and the kids getting surprised to see Atharva hanging to the side of the truck.

Meanwhile, Atharva signals the kids to distract the goons while Imlie fights with the main goon in the driving seat.

Further, Atharva starts fighting one of the guys and throws them out of the truck one by one.

Imlie also manages to throw out the main goon along with his gun and smiles at Atharva while the kids tease them.

The kids say that they are the first real-life hero and heroin they have seen and ask them about their first love.

Atharva says that his first crush was a teacher from his school while Imlie blushes as she says that she directly fell in love and that too with him only.

Further, Imlie calls the nurse at the well-being center and talks to Cheeni who shouts at them to save her.

Once the nurse leaves, Cheeni sneaks into the electricity room and turns the power off.

Afterward, Imlie and Atharva reach the wellness center while Titu and a girl run off to play games.

Imlie tries to ask about Cheeni but the nurse tells her to wait until the electricity is back.

However, they realize that Titu and the small girl are missing and run off to find them.

The electricity comes back and Cheeni starts shouting fearing being frozen to death.

The little girl notices Cheeni in the cold storage and informs Imlie and Atharva about it.

However, being too worried for Cheeni, Imlie pushes him away and unlocks the door herself.

As she runs to hug Cheeni, Cheeni just pushes her into the cold chamber and runs out of there.

Imlie looks on in shock while Atharva asks Cheeni if she is okay momentarily forgetting about Imlie.

However, as soon as he remembers Imlie, he turns back and gets shocked to see that she is locked inside the cold chamber.

He shouts for the keys while Imlie shows him the bundle of keys in her hands and tries to use humor to cope with the situation.

Atharva tells the doctor to get the keys while joking with Imlie so that she does not fall asleep.

The doctor says that the employee with the duplicate key is also not on duty and tells Atharva to make sure that Imlie does not fall asleep or else she will die of hypothermia.

The doctor leaves to arrange something while Atharva and the kids try to keep Imlie away in the cold chamber with increasing temperature.

© Copyright tellybest.com, 2022, 2023. All Rights Reserved. Unauthorized use and/or duplication of any material from tellybest.com without written permission is strictly prohibited.
Cached Saved on: Thursday 26th of January 2023 12:35:25 AMCached Disp on: Monday 6th of February 2023 05:26:16 AM