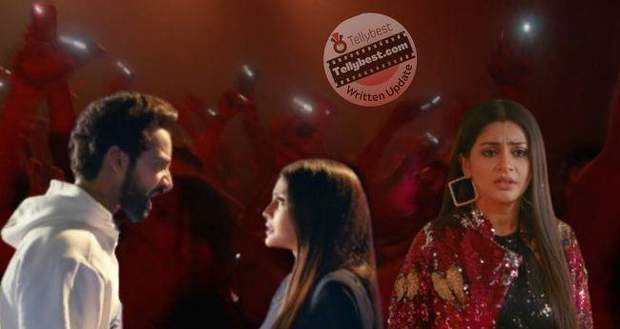 However, Imlie gets angry as she tells him that he is making his situation out to be helpless and has fallen in love with the image of the alcoholic DJ.

She tells him that he has fallen in love with alcohol and that she won't disturb him as she has a project to work on.

Atharva jokes that he thought he was her project while she tells him about her project.

Meanwhile, she gets a call from someone and attends to it while Atharva thinks that he was the one holding back Imlie from climbing higher in her life and leaves.

Imlie ends the call and turns to see the floor empty and runs around looking for Atharva wondering if she scolded him too much.

Back at the Rathod house, Abhi tells Cheeni to come on a drive with him with the promise that he will not take her to any Tapri.

She agrees but stops once she hears Rupy telling that they will be discussing pre-marriage rituals.

Cheeni thinks that she should stay back to see what she is getting but Rupy tells her to go on the drive with Abhi.

Meanwhile, Atharva walks out on the road with the bottle of alcohol in his hand while blabbering that he is a bad person.

Imlie also walks out looking for him when she sees a truck coming towards Atharva.

She runs and saves him by dragging him to the side of the road.

They both roll on the ground together while Imlie separates from him.

Imlie asks him if he did not see the truck while he asks her why she's helping him.

She is about to confess that she loves him but changes her words and says that she is doing this for his parents.

They both argue as Imlie takes the bottle from his hands arguing that she will also drink.

Atharva challenges her to drink the whole bottle and she starts drinking as she starts walking on the road with Atharva walking behind her.

Meanwhile, Abhi brings Cheeni to an orphanage telling her that he feels happy when he often comes there.

She tells him to take her picture and is about to return to the car when Abhi asks her if she came there to just take a picture.

She laughs nervously as she makes up an excuse that she wants to spend the whole day with orphans and that they should come later as she feels happiness from the gates only.

Back on the road, Imlie falls on the ground getting drunk while Atharva also sits beside her on the road.

She gets emotional as she tells him that she is trying to listen to what her heart wants for the first time and laughs.

Atharva asks her what she wants.

Just as the raindrops hit the ground, Imlie laughs as she says that she wants to dance in the rain.

She dances with the kids in the rain and makes Atharva join while he looks at her with admiration and another indescribable emotion.

She notices his gaze and also looks at him as they convey their moment of happiness through the eyes.

© Copyright tellybest.com, 2022, 2023. All Rights Reserved. Unauthorized use and/or duplication of any material from tellybest.com without written permission is strictly prohibited.
Cached Saved on: Wednesday 25th of January 2023 05:10:00 PMCached Disp on: Tuesday 31st of January 2023 06:54:59 PM