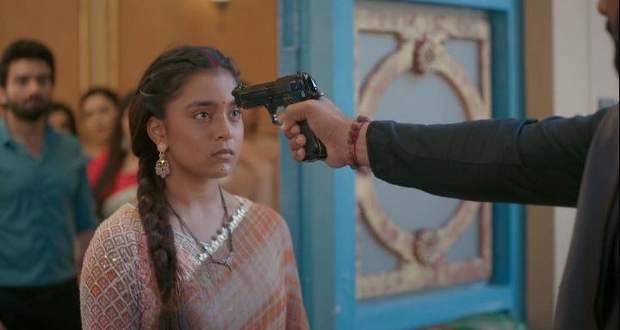 Today's Imlie 2nd July 2022 episode starts with the Rathore family getting ready to go for the Pooja while Jyoti asks about Imlie.

Aryan says that Imlie is coming as she wants to rest and asks Jyoti why it's important.

Just then, Imlie comes there and says that she is coming and the family goes towards the main door.

However, as soon as they open the doors, goons are seen holding their guns out ready to attack.

Imlie, who is holding a knife from behind goes forward and attacks them followed by Aryan and Sundar.

The kidnappers however make Aryan unconscious and abduct him while Imlie runs after him.

Other goons lock the rest of the family members inside and drive away in a van while Imlie follows them.

However, Imlie falls to the ground and loses the track of Van.

However, Arpita and Sundar hold her back saying that they will call the police while Neela stops Imlie asking if she has any evidence.

Imlie storms off into her room while Jyoti smirks as she gets sympathy from the rest of the family members.

Elsewhere, Aryan gets taken to someplace as the goons keep mocking him making him wonder who is the one behind this.

Meanwhile, Imlie gets worried wondering how to save Aryan while Harry comes to her room in his wheelchair.

Imlie begs Harry to help her save Aryan and cries when suddenly Harry stands up shocking her.

Harry tells Imlie that he's ready to help her.

© Copyright tellybest.com, 2020, 2021. All Rights Reserved. Unauthorized use and/or duplication of any material from tellybest.com without written permission is strictly prohibited.
Cached Saved on: Tuesday 2nd of August 2022 11:42:23 AMCached Disp on: Sunday 14th of August 2022 01:02:12 PM