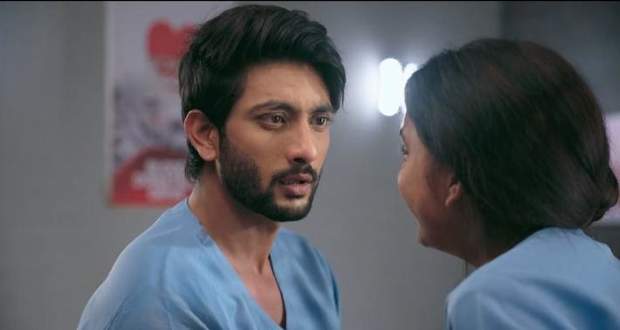 Today's Imlie 2nd June 2022 episode starts with Jyoti asking Aryan to join the family in celebration while he says that he doesn't want to ruin the family's happiness at the moment.

However, Aryan stops Jyoti from saying bad about Imlie and tells her that lmlie is his truth and that he will break everything that is meddling with it.

Aryan walks to the hallway and accepts a sweet from Madhav which confuses the whole family.

Imlie makes fun of Aryan for eating something that's not sugar-free and goes with Madhav to bring another box.

Jyoti questions Aryan but he tells her that he does not have any reason to doubt either Imlie or Madhav.

Further, Neela insults Imlie saying that she can't raise a child as she's herself a child while Aryan calms Imlie from thinking too much.

Later, in their room, Imlie worries wondering what will happen to the child as she is only twenty years old and starts blabbering.

Meanwhile, Neela taunts Gudiya and thinks that she has to do something about Imlie.

The next morning, everyone is at the breakfast table except for Imlie.

Neela taunts Imlie for going to work when she learns that Imlie has gone for a walk not to work.

Just then, a parrot comes and lands on Neela's shoulder while Imlie arrives and introduces the parrot as Mirchi.

Imlie says that the parrot called her Amma (mother) which made her decide that she will keep him and learn how to become a good mother.

Elsewhere, Jyoti is at Bhaskar's office trying to find anything that she can use against Madhav or Imlie to influence Aryan.

Just then, she overhears a coworker congratulating Madhav and further manipulates him to restate how he carried out his sting operation.

Jyoti learns that Imlie had fallen unconscious in the middle of their sting operation.