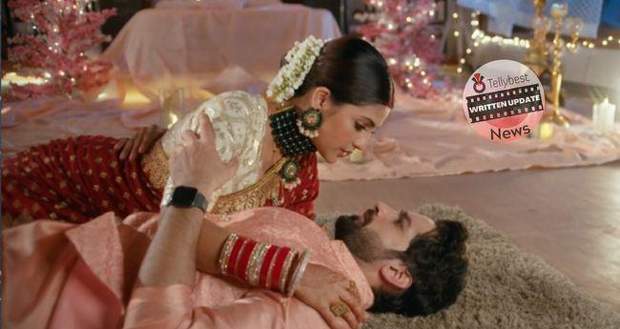 Today's Imlie 2nd November 2022 episode starts with Chini cuddling Atharva and saying that society will not encourage their love, but she is only his.

He claims that if God is with them, it doesn't make sense to meet sneakily.

Cheeni admits she is aware, but the couple has no choice for the time being.

She attempts to be flirtatious with him, but Jatin arrives in his car and fumes upon seeing them.

Jatin notices Atharva leaving and believes Atharva is having an affair with Chini, thus leaving his wife lonely and so he hits Atharva with his car as payback.

Chini is taken aback by the mishap and recognizes Jatin as the perpetrator. He appears to her to be a psycho.

Imlie is taken aback when he sees Atharva's wounded body and pleads for assistance from the locals, but they photograph him instead.

Imlie keeps telling them to be compassionate and call an ambulance, however, they all leave.

Meanwhile, Imlie reflects on her wedding vows with Atharva and she ties a dupatta around his and her legs. She clutches him securely and pulls him to the car.

Rupy asserts she has already told Chini that she cannot divide Atharva and Imlie but stops seeing Cheeni's terrified expression.

Rupi asks her to explain what transpired but Chini claims that Atharva was in an unfortunate incident and that Imlie is now with him.

Later, over the phone, Chini obtains a threat from Jatin that if she ends up taking his name, he will expose to the world that she is engaged in an affair with Imlie's husband which leaves Chini terrified.

Imlie reads aloud a sonnet to motivate herself and organizes Atharva's hospitalization.

She informs Ranas about Atharva's unfortunate incident, as well as the police, regarding how a driver hit Atharva.

Arpita instructs Chini to accompany her to the hospital because Imlie will build confidence from their presence.

Chini says she is unable to visit the hospital because she is deeply uncomfortable.

Rupy mocks her for not caring about her love, Atharva.

She further claims that Atharva is in this state because of her, and Imlie was recently married and that she stole her sister's happiness.

The doctor claims that he is attempting to stabilize Atharva's condition, but that he has lost a lot of blood.

Imlie speaks with the cops, who commend her for notifying them on time.

They claim that the person who hit Atharva was apprehended and bring Jatin in front of everyone, and Chini is taken aback.

© Copyright tellybest.com, 2022, 2023. All Rights Reserved. Unauthorized use and/or duplication of any material from tellybest.com without written permission is strictly prohibited.
Cached Saved on: Monday 21st of November 2022 12:58:31 AMCached Disp on: Wednesday 7th of December 2022 04:12:56 PM