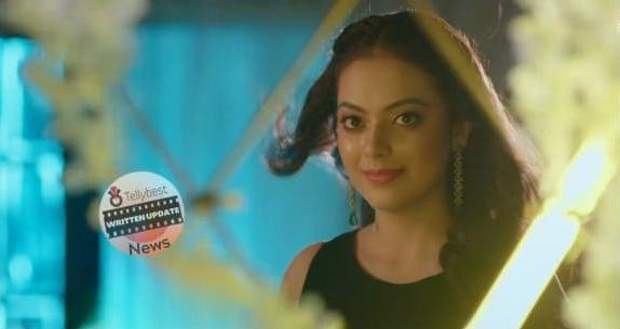 Today's Imlie 2nd October 2022 episode starts with Imlie admiring Atharva’s picture and recalling the events when he saved her.

Imlie agrees to the marriage and Cheeni snatches the phone from her and gets shocked seeing Atharva’s picture.

On the other hand, Atharva discovers Imlie’s account with the name “Cheeni Di Ki Imlie” and gets happy after finally discovering Cheeni’s name.

Atharva is confused about whether it’s Cheeni’s account or Imlie’s but sends the message anyway.

In Imlie’s room, Cheeni assures Imlie that she will talk to him and Imlie gets nervous and goes out to drink water.

However, Cheeni sends a message that she does not want him to marry her as she is forced to marry him.

Meanwhile, Atharva goes to Rathore's house sneakily and Cheeni gets shocked seeing him and is about to scream.

However, Atharva puts his hand on her mouth and both get lost in each other's eyes.

Later, Imlie enters the room and gets shocked seeing Atharva and asks him what he is doing here.

Atharva tells them that he came to ask why she refused the proposal and looks at Cheeni softly.

Afraid of her secret getting revealed, Cheeni lies that she messaged him because she wanted the bride and groom to talk alone.

Meanwhile, Atharva confirms the proposal from their side and goes back home happily while Imlie is blushing.

The next morning, in the Rana house, Imlie and Cheeni enter for the engagement and Rana's family gets excited and Atharva gets lost in Cheeni’s beauty.

Meanwhile, Rudra and Atharva admire the difference in both sisters' personalities.

After some time, Atharva sends his siblings to bring his bride to the terrace.

Misunderstanding Imlie as his bride, they take her to the terrace but Imlie is not able to find him.

At the same time, Cheeni climbs the stairs from the other side and meets Atharva.

He tells her he wants to confess his feelings to his bride.

However, furious Cheeni advises him to confess his feelings to Imli in a grand style.

Hearing Imlie's name, Atharva gets confused but thinks Rathore's sisters love each other.

Afterwards, Atharva dances on the stage confessing his feelings to his bride and Cheeni dances with him like a couple.

Meanwhile, Rupi pushes Imlie to Atharva and she falls into his arms.

Later, Atharva is talking to Kia and tells her that his bride will become Cheeni Atharva Rana.

Kia's eyes shine with mischief and she calls the press reporter inside the house to make fun of Rana's family.

Meanwhile, both Cheeni and Imlie come to the stage for the engagement.

Atharva picks up the ring and puts his hand out for Cheeni but gets shocked when Imlie holds his hand.

At the same time, Rudra announces Imlie as Rana's daughter-in-law.

© Copyright tellybest.com, 2022, 2023. All Rights Reserved. Unauthorized use and/or duplication of any material from tellybest.com without written permission is strictly prohibited.
Cached Saved on: Monday 21st of November 2022 02:14:38 AMCached Disp on: Tuesday 6th of December 2022 01:35:01 PM