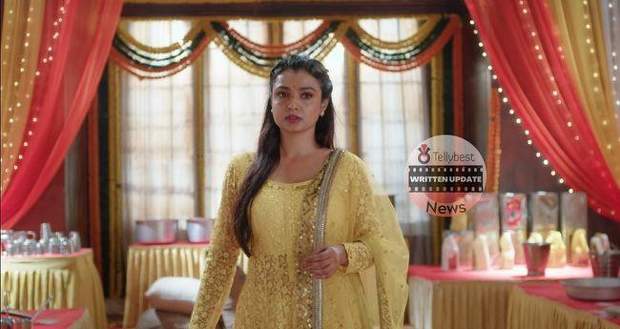 Meanwhile, Neela goes to Malini and Anu to taunt them about owing Imlie for saving her life but Malini angrily states that she will repay her by separating her from Aryan.

Imlie tries to put Cheeni to sleep by singing a lullaby for her but Chini requests to drink water.

As Imlie is on her way to the kitchen, she notices Aryan coming her way and hides behind a pillar.

Aryan brings out the anklet from Imlie and talks to himself while wondering if Imlie will leave him if he changes.

Imlie hears him and comes forward thinking that Aryan has regained his memories.

Imlie asks him why he was coming toward her room and he tells her that he just wanted to check up on Cheeni.

He compliments Imlie for taking care of Cheeni and making Cheeni like her only.

However, Imlie gets upset and says that she is alone without Cheeni in her life while Aryan tells her that he chooses to be alone and doesn't need anyone.

Imlie tells Aryan that even if he doesn't need anyone, someone might be in his need very badly.

Aryan asks her whom and Imlie frantically searches for an answer and replies that his future and his business.

The next morning, Aryan returns to the office and demands all the reports in the last five years in the next 15 minutes.

At the same time, Imlie hides from Aryan and rushes into the office to not be seen by him.

Aryan goes into the same office and sits while Imlie takes the help of the table to hide from him.

Malini comes to the office and berates the employees asking them if they have gotten a new boss when Aryan comes forward.

He tells her that he has returned and asks her about the huge sum of money that was withdrawn the previous day.

Aryan tells Malini that he wants all the files from the last five years in his office and leaves while Imlie is impressed.

Meanwhile, Malini worries wondering how she will hide the scams she has been doing.

© Copyright tellybest.com, 2020, 2021. All Rights Reserved. Unauthorized use and/or duplication of any material from tellybest.com without written permission is strictly prohibited.
Cached Saved on: Saturday 1st of October 2022 11:29:15 PM