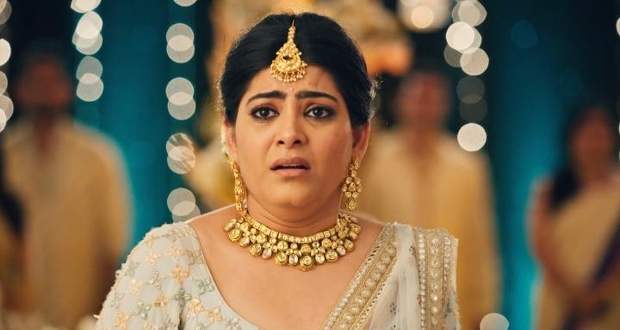 Today's Imlie 30th April 2022 episode starts with Imlie sitting on her bed recalling Aryan's words regarding a mother while also remembering how she behaved with Meethi and broke her relationship with her.

Further, Imlie calls the post office of her hometown and talks to the postman about Meethi and Satyakaam.

The postman tells Imlie that the couple cannot stop talking about her and is always missing her.

Imlie disconnects the call and cries while Aryan notices her crying as he is walking by the room and stops.

Aryan goes to the room while Imlie still doesn't notice him.

Seeing Imlie upset, Aryan asks her what's wrong when she suddenly flings into his hands and cries while hugging him.

Aryan makes her sit on the bed and calms her by caressing her back.

Imlie tells Aryan how she behaved with Meethi after their marriage and once again has a breakdown.

In a hysterical panic, she starts comparing herself to Uday when Aryan stops her.

Aryan holds her firmly and tells her to not blame herself saying that he is at fault for everything.

He apologises for not being a good person to her and starts talking bad about himself.

However, Imlie puts her hand over his mouth and stops him from speaking further saying that she doesn't hate him.

Just then, they hear a window breaking and go outside to see who is the culprit behind it.

However, they don't see anyone and spend some time in the garden while somebody is keeping an eye on them.

The next morning, the priests give the date of marriage two days later while Neela ill-talks about Sundar and makes the priests leave.

Afterwards, the family is having breakfast when Sundar informs them that he is applying to a hotel management course.

He also informs that he has resigned from his work at the Tripathi house.

Just then, Sundar's mother comes there and starts rebuking Sundar for marrying a widowed girl.

Imlie calls Sundar's mother Nanda Prasad an old lady and scolds her saying that Arpita's name is not a widowed lady.

Nanda Prasad rushes to the room while Sundar asks Arpita for some time to convince his mother.