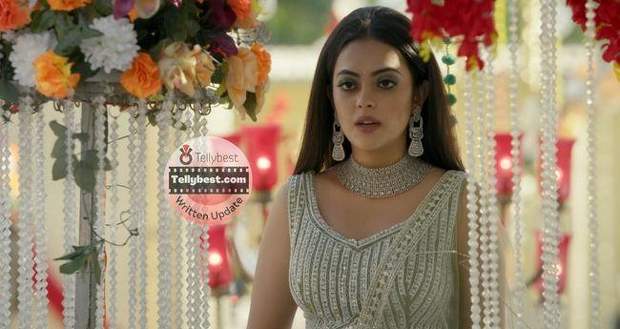 Today's Imlie 30th December 2022 episode starts with Imlie telling Atharva to leave those excuses while Atharva talks back to her.

Imlie gets angry as she accidentally confesses that her heart still loves him and tells him that freedom isn't given that easily.

Atharva says that he does not want her help and is about to go to sleep.

He wakes up but tells her that he won't listen to everything that she says.

Imlie smiles as she says that she knows how to get over his stubbornness and leaves.

Further, Imlie tries to instill good habits into Atharva by forcing him to brush his teeth and meditate.

Atharva finally manages to lock himself inside his room and tells Imlie that he does not want to get better.

Imlie walks towards the stairs thinking if she should leave when Rudra and Devima stop her midway.

They praise her for helping Atharva while Imlie tells them that he does not want to get better.

However, the couple tells Imlie that God has given her and Atharva a new chance and they fill her with newfound confidence.

Later, Atharva comes out of the room and Imlie again pesters him to drink juice.

Atharva argues with her telling her that she doesn't know what the pain feels like while she tells him that she only had pain in her life which he refused to acknowledge even now.

Afterward, Imlie gets a call from Rohini from Bhaskar Times' HR Department and learns that she has got the intern position that she applied for.

Just then, Shivani comes there and taunts Imlie saying that she is thinking about a job when she can't even handle her family.

Imlie talks back to Shivani and leaves while Shivani is stunned at Imlie's new behavior.

On the other hand, Anu is taunting Sundar and Arpita for not having much jewelry to give Cheeni when they get a call from Devika.

On the call, Devika and Rudra praise Imlie and her efforts to straighten out Atharva while they say that they hope Imlie and Atharva become one again.

As the call ends, Cheeni comes there and asks if it was the florist.

However, Anu taunts that it was from the in-laws who are the biggest thorn in her life.

Sundar and Arpita leave while Anu tells Cheeni that she is losing everything she snatched from Imlie.

However, Cheeni states that she is getting way much more than that from the marriage and leaves.

Back at the Rana house, Keya and Akash have invited all of Atharva's alcoholic friends with the intention to make Atharva drink again.

When Devika and Rudra get to know about this, Akash and Keya lie to them that they are doing something to help Atharva.

Meanwhile, Imlie sees as Atharva greets his friends and calls for more alcohol to be sent.

He takes a bottle of alcohol in his hands and thinks that he has to drink in front of Imlie because he cannot let her have hopes of him getting better.

© Copyright tellybest.com, 2022, 2023. All Rights Reserved. Unauthorized use and/or duplication of any material from tellybest.com without written permission is strictly prohibited.
Cached Saved on: Wednesday 25th of January 2023 09:05:04 AMCached Disp on: Monday 6th of February 2023 05:43:20 AM