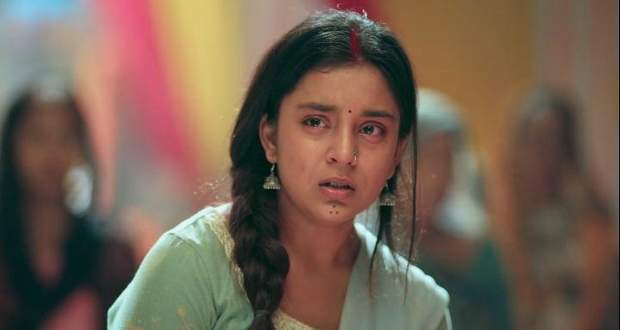 Today's Imlie 30th July 2022 episode starts with Cheeni wondering what to feed Aryan while he offers to give her money to buy something from outside.

However, she refuses to touch his thing and tells him to eat the Laddoo she gave him earlier.

They get into a funny banter.

In Delhi, Malini comes to the Rathore house and video calls Aryan telling him to come back against Arpita's protests.

Back in Pagdandiya, Cheeni picks up the video call and Malini suddenly gets flashbacks of her baby.

However, Malini reveals to Aryan and Cheeni that Narmada's health is worsening and demands him to return.

Meanwhile, Imlie returns home and tries to open the door hoping that Aryan has sent some lawyer and hasn't come there himself.

Cheeni shouts to calm everyone and further gives instructions to Arpita to make a herbal tea for Narmada.

Narmada's health gets better and she tells Aryan to not hurry to return.

Meanwhile, Imlie enters the home through the window and sees Cheeni shaking hands with the city guy.

However, she gets a call from the news channel editor Kamal and she leaves to attend the call.

Kamal scolds Imlie for having learned that she worked for Bhaskar Times in the past and didn't inform him.

Imlie reveals the true reason for her exiting the Bhaskar Times but Kamal doesn't give her any other option rather than to solve the matter without having to go to court.

Elsewhere, Imlie sees the watch and cries getting emotional remembering her memories with Aryan.

Back in Delhi, Anu tries to indicate getting Aryan and Malini together but Malini firmly refuses saying that she and Aryan are business partners only.

Meanwhile, in Pagdandiya, Aryan realizes that his watch is missing and Cheeni offers to help him look for her.

Aryan gets a call from Sundar and he leaves forgetting to wait for Chini while Imlie stops Cheeni and asks her why she let the city guy into their house.

Cheeni tells her that he wanted to meet her and gives Imlie the remaining half of the laddoo joking that a love story can be formed between her and the city guy since they shared the laddoo.