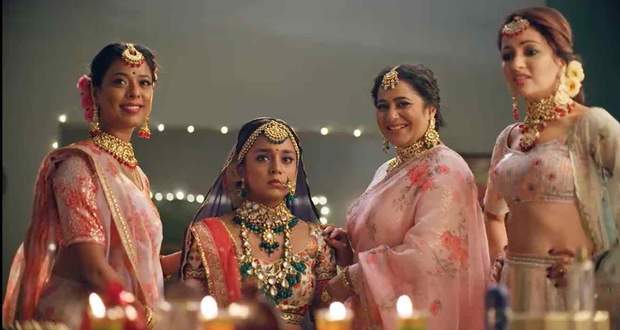 Today's Imlie 30th March 2022 episode starts with Neela confessing all her evil deeds to Imlie thinking that it is Gudiya behind the veil.

Imlie is astounded by listening to Neela's confession and her money-minded evil plans. Imlie is enraged and kicks Neela's feet resulting in Neela stumbling forward.

Aparna and Meethi, bring Gudiya (assuming her as Imlie) for the prayers. Aparna heeds toward her leg and worries about the missing black thread that she tied to Imlie.

Neela is taken aback, she asks Imlie (assuming her as Gudiya) why she shoved her. Imlie mimics Gudiya's voice and tells that Aryan's key for the locker belongs to her and runs away.

Everyone closes their eyes to pray for the god, Neela uses this opportunity and yanks Gudiya from there.

Infuriated Neela, she slaps Gudiya and tells her that her mere existence is because of Neela's mastermind.

Later, Neela and Gudiya find out about the switching of places and confusion.

However, Imlie sneaks back and hugs Sathyakam feeling happy. He tells her that now he feels like really meeting Imlie.

Imlie removes her veil and talks with Sathyakam. Meethi, Imlie and Sathyakam get emotional and hugs each other as tears brim out of their eyes.

Hence, Aparna asks Imlie to cheer her parents (Meethi and Sathyakam). Sathyakam tells that he had given Imlie's gift to Meethi and says he has very important work back in the village.

Imlie is brought to Mandap, she sees Aditya and Aryan's family and decides to not break their hope and trust.

Upon seeing Imlie standing midst the hall, Meethi brings Imlie to the Mandap beside Aryan.

The priest starts rituals, but Neela stops and asks Narmada to present Imlie with the ancestral bangle. She grabs the bangles from Narmada and marches towards Imlie.

Neela intentionally drops oil on Imlie's dress and hurt her knuckles. Arpita calms tensed Narmada and assures her that everything would be fine.

Aparna takes Imlie with her to clean the oil. Aparna gets preoccupied while Neela hits Imlie with a glass vase and ties her with the help of a waiter.

The waiter sneakily places Imlie atop the Mandap by plastering her mouth.

Gudiya (dressed as Imlie) replaces Imlie and joins Aryan to perform the rituals.