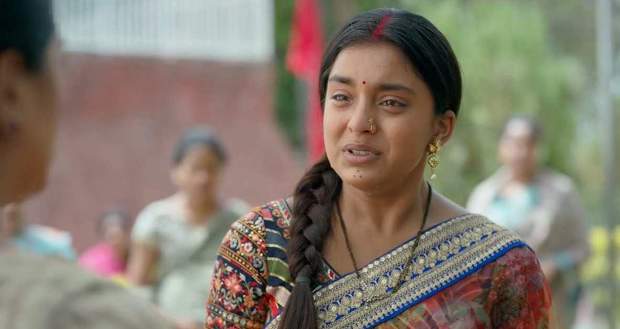 Today's Imlie 30th May 2022 episode starts with Aryan holding Imlie's hand and telling her that they will stay together forever.

Just then, Jyoti comes there to call them for dinner while Aryan tells Imlie to go as he will return after completing some work.

Jyoti acts concerned for Imlie and gives her medicine saying that they are supplements for her health.

However, in reality, they are the pills that will make Imlie infertile in the future.

Elsewhere, Neela and Gudiya instigate Narmada saying that Imlie will take over the business as she doesn't have to care about the babies anymore.

However, Jyoti comes there and tells Narmada that she has given Imlie medicine from a US doctor which will make her fertile.

Later, Neela tries to intimidate Jyoti who reveals her plan that she has given Imlie medicine to make her infertile.

Back in Aryan's room, Imlie is stopped by Aryan from eating the medicine as he talks to her about adoption.

However, Imlie tells him that they should think about it thoroughly and talk to Narmada also.

The next day, they go to the adoption home and the caretaker takes them to the meet kids.

Further, Aryan sees Imlie bonding with the kids very easily and admires her.

Back at the Rathore house, Jyoti instigates Narmada saying that Imlie is thinking to adopt a child.

She demands that Aryan divorce Imlie and marry one of the girls.

Imlie keeps trying to justify herself while crying when Aryan shouts at Narmada to stop.

Aryan reveals that he was the one who suggested adoption but Imlie stopped him saying they need to talk to Narmada first.

Narmada feels guilty while Aryan apologizes to Imlie saying that they can't adopt a child where the whole family doesn't accept them.

At night, Imlie calls Mithi but fails to tell her the ongoing situation.

As the call disconnects, Jyoti comes there and consoles Imlie saying that she can talk to her anytime.

Finally, Imlie rants her feelings to Jyoti while Jyoti reminds her to take her supplements.

To download Imli all episodes or watch Imlie today's (30 May 2022) latest full episode, go to hotstar.com

© Copyright tellybest.com, 2020, 2021. All Rights Reserved. Unauthorized use and/or duplication of any material from tellybest.com without written permission is strictly prohibited.
Cached Saved on: Wednesday 29th of June 2022 12:08:19 PMCached Disp on: Saturday 2nd of July 2022 07:53:58 PM