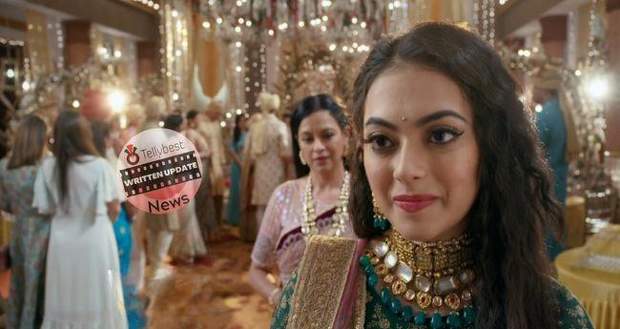 Today's Imlie 30th October 2022 episode starts with Cheeni thinking of ideas to make Atharva believe that she loves him only and her attention averts to Imlie's diary which Imlie uses to write her poetries.

Cheeni tears the page out of the diary thinking of giving it to Atharva.

At the same time, Atharva comes there in the room telling Cheeni that he is not going to leave her and live with Imlie.

Cheeni starts with her mellow drama with fake tears in her eyes, saying that she is also finding it hard to accept everything that is happening.

She handovers the poetry to Atharva saying that she wishes he loves reading the same way she felt writing it.

Atharva feels all his doubts vanish in the air as he reads the poem aloud confirming that Cheeni is his Miss Shyra.

Hugging her tightly in her arms, Atharva states to Imlie that he won’t let Imlie win who became the reason behind the failure of their true love.

Cheeni gets confused when Atharva calls her his true love Miss Shyra, however, she doesn’t mull over it much.

Meanwhile, Rudra and Devika ask the Rathod family to stay for Imlie’s Grahpravesh as Narmada bids her farewell.

Cheeni comes there and stops Imlie from going inside the house, saying that Imlie cannot go inside without taking her gift.

Anu makes the smile fade away from everyone’s face as she starts commenting about Cheeni’s gift to Imlie that is Radha Krishna's idol.

However, Imlie turns the tables by telling all that she sees Radha and Rukmani as two different faces of love. She beautifully explains her thoughts which touches everyone’s heart.

Narmada bids her goodbyes to the Rana family and leaves with the other members.

The Rana family welcomes Imlie into the house with her Grahpravesh while Atharva scowls all the time.

Cheeni appears at the main door after everyone goes inside.

Being influenced by Anu’s words, Cheeni follows Imlie’s footsteps that she left behind on the floor painted in red.

The color drains from Cheeni’s face, halting her in her steps as Rudra comes there.

Anu comes to Cheeni’s rescue, however, Rudra, taunts Cheeni to stop equalizing with Imlie now and if she wishes to come inside she will have to change her path.

Further, Rudra turns to Anu and asks her to leave with Cheeni saying that the guests look good for a while only.

Later, the family proceeds with the rituals and makes Atharva and Imlie find a ring in a large bowl of milk having flower petals.

The color of the milk changes to black as Imlie and Atharva put their hands inside the bowl.

Meanwhile, Cheeni is feeling proud of her plan of ruining the ritual as she had put the black color on Atharva’s hand when she met him.

On the other hand, Atharva gets angry when his family starts talking about a bad omen.

In his anger, he blurts out that the marriage has happened now and what else can happen badly.

© Copyright tellybest.com, 2022, 2023. All Rights Reserved. Unauthorized use and/or duplication of any material from tellybest.com without written permission is strictly prohibited.
Cached Saved on: Monday 21st of November 2022 08:03:07 AMCached Disp on: Tuesday 29th of November 2022 10:18:05 AM