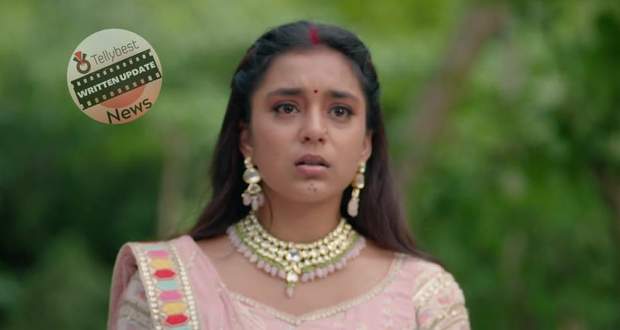 Today's Imlie 31st August 2022 episode starts with  Imlie waking up and recalling her and Aryan sitting on the vanity and putting their head on the vanity shelf.

Both AryLie looks into each other's eyes, intoxicated from the special sharbat.

Meanwhile, Imlie starts to talk with the walls but Aryan puts her on the vanity stool and sits on his knees in front of her.

Aryan confesses his love to Imlie and tells her that he missed her so much in the past 5 years.

Meanwhile, an emotional Imlie asks him if he missed her 3 kilos or 5 kilos.

Aryan says a thousand kilos while she says he has suffered a lot due to her.

Crying Imlie desperately asks him if she can remove this burden.

However, Aryan puts his head on her lap and she hugs him and puts her head on his.

Meanwhile, Imlie starts to apologise to Aryan sitting on the floor but Aryan stops her.

However, Imlie doesn’t listen and blames herself for every incident.

Crying Imlie leaves the room but Aryan stops her at the door and holds her lovingly.

Aryan apologises to Imlie for blaming her for the child's death and sending her away.

He informs Imlie he is not going to forgive himself for this and goes inside the door.

Imlie hugs Aryan with her hands on his neck and calls both of them fools.

Meanwhile, Imlie holds Aryan's shoulders and confesses her love to him but Aryan asks her how much.

Imlie says 50,000 kilos but Aryan says it's the wrong answer.

Hearing his words Imlie loses her hold but Aryan pulls her closer.

Aryan praises Imlie’s love and informs her that it is immeasurable.

Meanwhile, Aryan kisses her forehead and kisses the sides of her face.

Aryan takes her to the bed and both lose each other in their heavenly body.

On the other hand, Cheeni gets shocked seeing Malini and hides.

Malini hears the music sound and goes toward the cottage.

However, Cheeni makes a cat sound making Malini think that the cottage is empty and leaves.

Meanwhile, Malini doesn’t feel assured and comes back to the cottage to check it.

Cheeni throws a pebble to distract Malini but she finds Cheeni hiding behind the tree.

Malini asks Cheeni about AryLie's location but she runs from the place.

Meanwhile, Anu calls Malini and advises her to put the pandal on fire and finish off AryLie and Cheeni at once.

Malini sees food cooking in the pandal and sees the flame with a smirking look.