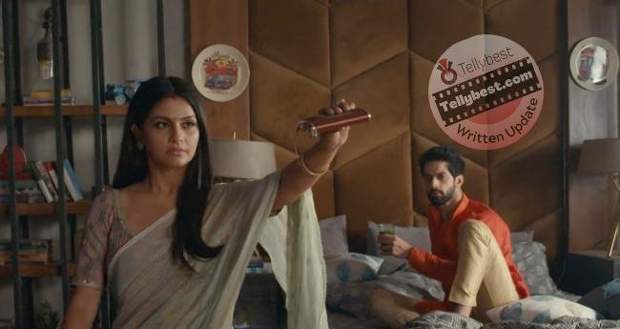 Today's Imlie 31st December 2022 episode starts with Atharva's friends drinking the alcohol and spitting it out as they say that it is not alcohol.

Atharva drinks it and looks towards Imlie asking her if she is the one who has done it.

Akash asks what has happened since he bought the most expensive one while Atharva reveals that it is bitter gourd juice instead of alcohol.

Atharva's friends get angry and leave while Rudra and Devika praise Imlie.

Back at the Rathod mansion, Abhishek, his mother Sonia and his father arrive with gifts while Cheeni focuses only on the gifts.

Rupy tells her to get the elder's blessings while she calls Abhi's father Santa Claus for bringing gifts for her.

They laugh while Rupy tells them to have lunch with them and sets the dishes.

On the other hand, Imlie is preparing for her first project while Ginni and Akash come there and talk with her.

Devika comes there and informs them that Imlie is the new intern at Bhaskar Times.

Rudra asks Imlie why she is interning when she is the owner of Bhaskar Times.

Imlie smiles as she says that she just takes care of Bhaskar Times while the real owners will always be her parents Senior Imlie and Aaryan.

Just then, Keya and Akash come there and complain about Imlie insulting them in front of the guests.

Rudra questions them while Shivani comes there and asks him how Akash and Keya being wrong makes Imlie right.

Shivani argues that Imlie insulted the guests of the Rathod house and humiliated the family which she would not have done when she was the daughter-in-law of the family.

However, Imlie gives her a curt reply telling her that she is staying back because she loves the family members.

Back at the Rathod house, Cheeni tells Rupy that she will not get her makeup done by the person who did Imlie's makeup.

Cheeni says that she wants only the most expensive and lies to Atharva and his family that it is because of her sensitive skin.

Elsewhere, Imlie gets her first project to find the daily problems of the people leaving in the slum areas of Delhi and she happily tells Rohini that she will complete it and give it before the deadline.

On the other hand, Abhi comes to Cheeni and asks her out on the date to where they went first while Cheeni says that she won't go to such a cheap place.

However, she sees Abhi's expression and lies that she was just joking.

Back at the Rana house, Imlie is working on her project while Keya complains about Keya to Devika.

Just then, they hear a sound and rush towards the main door to see a drunk Atharva on the ground.

He stands up with the bottle in his hands and tries to walk towards Imlie telling her that he is not drunk but stumbles and falls again.

He tells Imlie that she should stay as a visitor and leave after taking care of Rudra as Arto is already on the floor.

However, Cheeni brings red chili and tells him to eat it while he says that it is bad for his health.

Imlie tells him that alcohol is also bad for his health and tries to explain that he should not waste his sorrows on alcohol.

Atharva asks her whom should he get better for which silences Imlie.