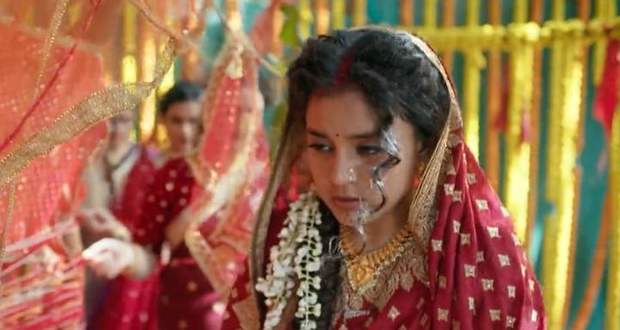 Today's Imlie 31st May 2022 episode starts with the Rathore ladies reaching the temple to do the Vat Savitri Pooja.

Imlie talks about keeping Nirjal Vrat while Narmada accuses her of just acting.

Later, Neela taunts Imlie by saying that if Aryan was married to Gudiya, he would have become a father by now.

Gudiya takes a picture and sends it to Jyoti who is with Aryan.

A lady checks Imlie and announces that she's pregnant which confuses Narmada and others.

Back at the office, Aryan keeps talking to himself about Imlie which annoys Jyoti.

Just then, Madhav comes to his office and gives Aryan a file of the sting operation he and Imlie did secretly.

Jyoti tries to instigate Aryan saying that Imlie hid a huge thing from him but he says that he's proud of Imlie.

Back at the temple, Imlie regains consciousness to see Neela telling the lady that it is not possible since Imlie is infertile.

However, the lady reveals that she is a midwife and can confirm that Imlie is pregnant.

Later, at the hospital, the doctor confirms that Imlie is pregnant.

Imlie calls Jyoti and requests her to bring Aryan home as she wants to surprise him with the news that she's pregnant.

Imlie and Aryan both see each other in the hallway and walk toward each other but Imlie stops and goes to the kitchen following a scent.

In the kitchen, the gas pipe is broken which is done by Jyoti as she throws a lit matchstick in the kitchen.

However, Aryan manages to save Imlie and push her outside the kitchen while he gets stuck due to an injury to the head.

Even after the family's refusal, Imlie wraps a shawl around herself and goes inside the kitchen to save Aryan.

Imlie manages to bring Aryan outside while the envelope gets burned in the kitchen as Aryan looks on.

Flashback shows, Aryan printing out the promotion letter of Imlie making her chief executive report of Bhaskar times, and putting it in the envelope.

To download Imli all episodes or watch Imlie today's (31 May 2022) latest full episode, go to hotstar.com

© Copyright tellybest.com, 2020, 2021. All Rights Reserved. Unauthorized use and/or duplication of any material from tellybest.com without written permission is strictly prohibited.
Cached Saved on: Thursday 30th of June 2022 10:13:25 AMCached Disp on: Saturday 2nd of July 2022 08:19:07 PM