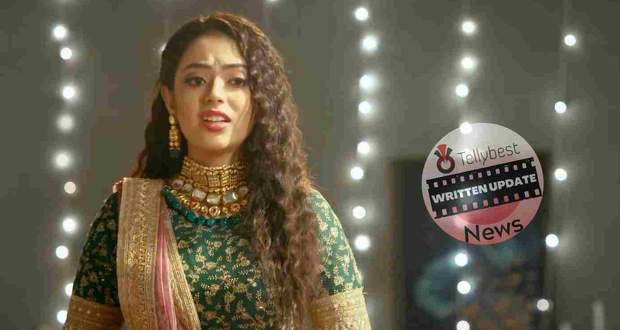 Today's Imlie 31st October 2022 episode starts with Atharva changing his words when everyone looks at him shocked at his words.

At the same time, Imlie sees black ink on his hand and shows it to everyone.

She removes the ink with her dupatta and gloomily says that the bad omen is removed.

Later, the ritual starts again and Imlie and Atharva roam their hands in the milk water.

Imlie pulls out the ring and Atharva walks out bored but Rudra stops him.

Rudra threatens him to do the rituals while Atharva taunts him for forcing everything on his life.

Meanwhile, Kia and Akash enjoy the show as Atharva is losing face in front of Rudra.

Atharva sits and the ritual starts again and both pull out the ring indicating they will take decisions equally.

He declares that he’s done and walks out after accidentally kicking the milk water.

In Rathore's mansion, Cheeni and Anu enter the house while everyone sits gloomily.

Seeing Cheeni happy, Rupi angrily confronts Cheeni for her apathy towards Imlie and raises her hand to slap her.

However, Cheeni tells her to slap and starts to cry pretending that she misses Imlie because she will not come to save her.

Cheeni runs to her room crying while everyone feels bad.

In Atharva’s room, Ginni, Divya and Kia tease Imlie while Atharva knocks on the door.

They walk away leaving Imlie and Atharva alone.

Atharva walks towards Imlie and puts his hand on her shoulder while she blushes.

However, he asks Imlie to get aside and picks up his wallet from the floor.

In Cheeni’s room, Cheeni's cry slowly turns to psychotic laughter while Anu compliments her for being Malini’s daughter.

Cheeni goes to check the suitcases so she can go to Anu’s house and control Imlie’s life from there.

However, she doesn’t find any suitcase and Rupi enters the room and declares she took them.

Rupi confronts Cheeni for snatching Imlie’s shagun and informs her that Sundar returned the money and jewellery to Imlie.

Cheeni gets furious as the money and jewellery was the only thing that was calming her down.

She loses her sanity and says she will destroy Imlie’s life and runs out of the house.

On the other hand, Atharv gets a call from Cheeni and Imlie listens to the conversation with closed eyes.

Atharva walks out of the room and Imlie sits on the bed with a confused expression.

In the living room, Rudra and Devika stop Atharva from going and ask him where he's going.

Atharva taunts Rudra that he will not be able to bear the truth and angry Rudra orders him to go back to his room.

Seeing Atharva, Imlie loses her balance and he wraps his hands around to save her but he falls down with her on top.

© Copyright tellybest.com, 2022, 2023. All Rights Reserved. Unauthorized use and/or duplication of any material from tellybest.com without written permission is strictly prohibited.
Cached Saved on: Monday 21st of November 2022 07:14:25 AMCached Disp on: Tuesday 29th of November 2022 10:47:30 AM