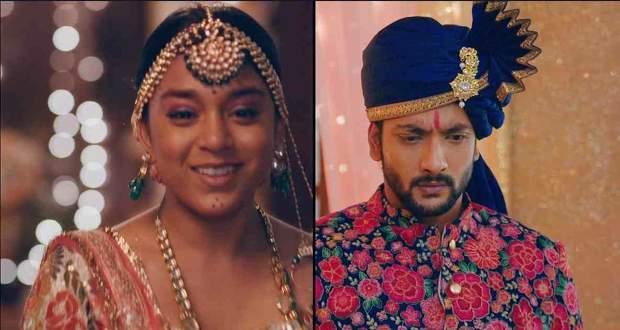 Today's Imlie 3rd April 2022 episode starts with Imlie’s bidaai ritual taking place and Imlie not talking with Meethi due to her forceful wish upon her.

Aryan notices Imlie’s unusual behavior towards Meethi and asks her about the matter when Imli runs away to the car before hugging her.

With Meethi’s assurance and Aryan promising to take care of Imli, the newly wedded couple leaves for their new home.

On the way, Aryan tries to goof around with Imlie but she gets irked up and gives away his entire wallet as a charity.

However, Aryan does not give up and drives the car straight to the Rathore’s.

Aryan and Imlie decide to divide the responsibilities

As they reach, Aryan and Imli decide to divide their relationship equally with mutual responsibilities and debt.

Aryan offers Imli his hand which she gladly takes to show off in front of Narmada and Arpita who wait for them at the doorway.

During grihapravesh, everybody gets worried after not seeing Imli’s footprints making their marks on the white cloth as Neela soaked the cloth in water.

However, Imli does not stand idle and walks on the cloth again after squeezing out the water from it.

Aparna tries to make Aditya understand that Imli is Aryan’s wife now and Aditya does not have any right over her.

Aditya denies believing that Imlie married on her own wish and tells himself that she does not love Aryan.

Back to the Rathores, Imli cries to herself and vents out her anger on Meethi as she calls her, Aryan hears the conversation and asks Imli not to be angry towards Meethi.

Narmada and Arpita ask Imli and Aryan to do a ritual of knot opening where both of them will have to open the knot of the thread on each other’s hand.

Neela takes away the thread from Narmada and ties it extremely tight making it painful for Imli.

While greeting the guests, Imli gets dizzy as her blood gets clotted at her wrist.

As Aryan notices Imli’s blue hand, she faints in Aryan’s arms, who carries her straight into the room.

Aryan quickly opens the thread from Imli’s wrist and asks her to open her eyes while feeling anxious.

After Imli opens her eyes, Aryan hugs her tightly in his arms but drops her back after realizing what he is doing.

Narmada congratulates both of them for passing the test and leaves them alone to talk to each other.

On the other hand, Aditya goes missing from the Tripathi house without telling anything which makes Aparna nervous.

At night, Neela plans to add sleeping pills to Imli’s milk so that she and Aryan cannot get intimate on their wedding night.

After keeping the glass in the room, Neela leaves as Imlie enters the room and gets cringed on seeing it decorated with flowers.

She attempts to drink the milk but spits it out after seeing Aryan coming that way.

Aryan enters the room but finds no one there, seeing the flowers, he quickly throws everything away and tries to act like he is asleep.

Entering the study of Aryan, Imli decides to live for herself and complete her dream of becoming the top journalist.

In an attempt of getting the trophy, Imlie loses her balance but gets lifted by Aryan who firmly holds onto her waist.

Both sleep on the stairs facing each other but still far away from each other’s proximity.

The next day, Aditya comes back and receives the invitation to Aryan and Imli’s reception from Narmada.

The Tripathis arrive at the function without Aditya while Imli appears with a broom and mop and announces that this is her real identity.