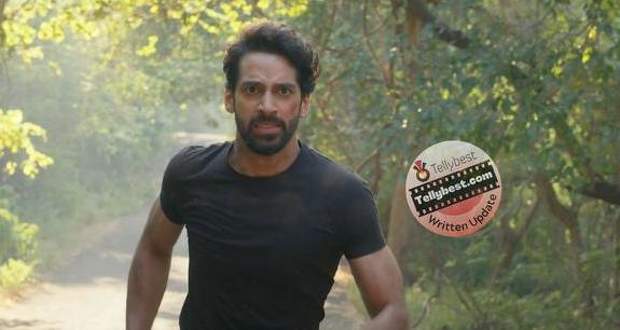 Today's Imlie 3rd December 2022 episode starts with the doctor telling Atharva to keep Imlie awake or else she can die from freezing in the cold chamber.

However, as Imlie responds to Atharva, she keeps falling asleep and finally loses consciousness.

Meanwhile, Atharva takes a visiting chair nearby and starts kicking it with the glass door of the panel to save her.

On the other hand, once Atharva fails to do anything he finally starts banging on the glass door in anger.

Cheeni gets worried while Atharva breaks into the cold chamber by breaking the glass door.

Atharva takes Imlie in his arms and leaves from there while the kids tell Cheeni that Atharva saved his heroin Imlie.

Later, Atharva tries to keep Imlie awake while holding her close to him with his hands circling around her.

Imlie wakes up and Atharva smiles up at her when Cheeni comes there and pushes him away saying Imlie needs to be warm.

Cheeni covers Imlie with the comforter while Imlie smiles at her sister gratefully thinking that Cheeni could never betray her.

Meanwhile, Cheeni gets angry as she recalls seeing Atharva and Imlie sitting close to each other and hugging each other.

Later, Cheeni is packing her bags while Imlie and Atharva argue with the doctor saying that they know the torture they put Cheeni through.

The doctor laughs as he tells Atharva and Imlie that he does not want to keep Cheeni either as she has trouble the whole hospital including patients in one day.

The little girl comes there and makes fun of Cheeni who feels angry at the situation and takes it out on the little girl.

She scolds the little girl and takes her toward the cold chamber while Atharva and Imlie stop her.

Imlie scolds Cheeni for even thinking of doing such a thing in the name of mere punishment and tells her to apologize to the little girl.

Cheeni stays silent while Atharva also speaks up and asks her if she will still say that she was not in her senses.

Taking advantage of the situation, Cheeni starts crying as she says that she really was not in her senses and starts talking about how she used to take care of Imlie.

The couple enters the house and the family greets them happily while Rupi sees Cheeni and gets confused.

Imlie tells the family that she is the one who brought her back home and tells the Rathore family to let Cheeni stay with her at the Rana family.

After many persuasions from both Imlie and Atharva, the Rathore family agrees and leaves while the family goes to bid them goodbye.

Meanwhile, Cheeni thanks Rudra for letting her stay in the Rana house once again and tells him to give her the blessing that she always wins against him.

© Copyright tellybest.com, 2022, 2023. All Rights Reserved. Unauthorized use and/or duplication of any material from tellybest.com without written permission is strictly prohibited.
Cached Saved on: Wednesday 25th of January 2023 12:15:56 PMCached Disp on: Wednesday 1st of February 2023 09:55:48 PM