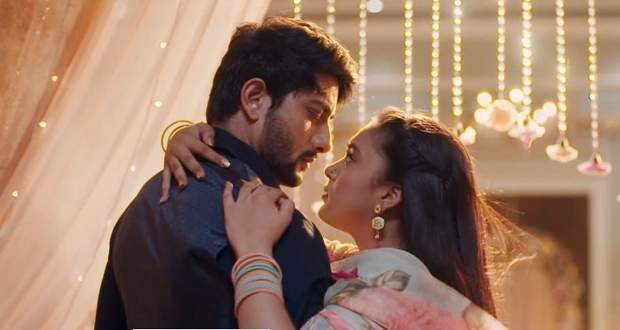 Today's Imlie 3rd May 2022 episode starts with Imlie threatening everyone that she will call the police if anyone takes or gives Dowry.

Imlie leaves while Nanda threatens Narmada that she won't be able to do Sundar's tilak if she doesn't give the dowry.

Later, Aryan is checking on the preparations of the marriage while he sees Imlie and gets mesmerized by her beauty.

He is about to walk towards her when Madhav comes there and gets the notice of Imlie.

Imlie informs Madhav of the mishap made in the work while Aryan advises him to stay back for the marriage.

Imlie accidentally says that Aryan is the best life partner and leaves once realizing what she just said.

Elsewhere, Narmada is anxious and thinks of giving the dowry while she orders Aryan to bring down Arpita.

However, Aryan feels hesitant thinking of seeing Arpita as a bride and refuses but Imlie convinces him.

They both are on their way to Arpita's room when Imlie tells Aryan that he can let out his feelings.

She tells him that Arpita is not separating from him and calms him by saying that he should voice his fear of separation.

They both share an intense eye lock when Arpita comes there and teases them for getting shy around each other.

Imlie compliments Arpita while Aryan gets hesitant once again to express his emotions through words.

Arpita hugs Aryan and tells him that she knows his feelings for her even though he doesn't express them with words.

To download Imli all episodes or watch Imlie today's (3 May 2022) latest full episode, go to hotstar.com