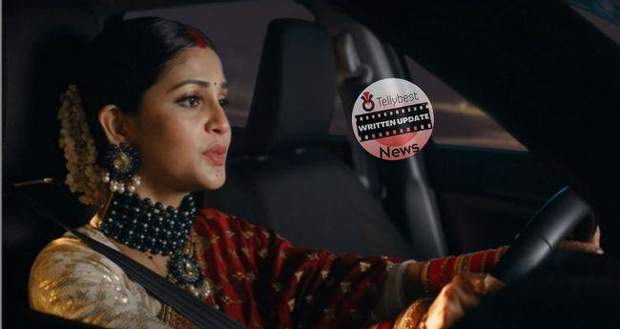 Today's Imlie 3rd November 2022 episode starts with the police officer informing Imlie that they did find a car that had a dent and bring out Jatin.

Cheeni fears that Jatin will expose her and shouts that he is innocent as he was with her the whole time.

Imlie says that everyone knows Jatin and that he can not do something like this.

Further, Cheeni goes with Jatin while Imlie looks at them questioningly.

Atharva's father Rudra recalls how he ousted Atharva and apologizes to Imlie saying that it is his fault.

However, Sundar and others comfort him saying that it is not his fault and taking him outside.

Shivani also sides with Divya and calls Imlie a misfortune.

Imlie however speaks up and says that Atharva himself agreed to marry her which makes her his wife and life partner, not a misfortune.

Shivani talks harshly with Imlie and calls her a jinx while unnecessarily misunderstanding her words to create an argument.

Further, Shivani drags Imlie out of the hospital and tells her to stay away from Atharva if she wants him to get better.

Elsewhere, Jatin demands money from Cheeni to hide the affair between her and Atharva from Imlie.

At the same time, Keya enters Atharva's room and unplugs the life support system hoping that Imlie gets blamed for it.

Rupi and Arpita see Imlie outside with Shivani and question what is happening.

Shivani says that Imlie has brought misfortune to their house and says that she will not let him near Atharva until he regains consciousness.

Shivani leaves while Cheeni comes there and acts angry thinking that she will get Imlie kicked out of the family too.

Cheeni goes inside the hospital and starts arguing with Shivani while Rupi and Arpita try to stop her.

However, Imlie comes there and stops the fight while Shivani starts insulting her again.

Imlie's Mangalsutra gets in Shivani's hand while Imlie feels that Atharva is in danger and runs to his room.

As Imlie enters his room, Keya jams both doors by entering false codes on the door.

The family tries opening the door while Imlie shouts to call the doctors.

© Copyright tellybest.com, 2022, 2023. All Rights Reserved. Unauthorized use and/or duplication of any material from tellybest.com without written permission is strictly prohibited.
Cached Saved on: Monday 21st of November 2022 04:10:49 AMCached Disp on: Monday 5th of December 2022 01:15:11 AM