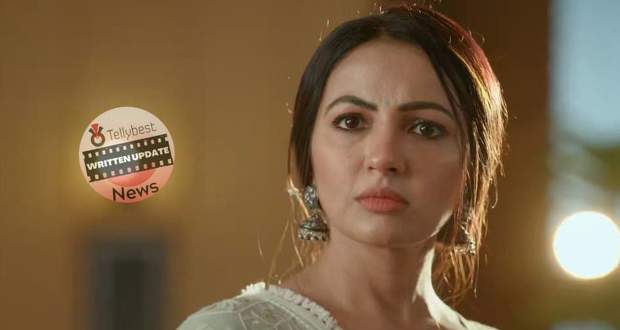 Today's Imlie 3rd October 2022 episode starts with Cheeni admiring a vase and Kia’s sudden voice scares her and the vase falls and breaks.

Meanwhile, Kia taunts Cheeni for not having Rathore’s name and says she is brought up by the Rathore family as a charity case.

However, Imlie joins the broken pieces of the vase and compares it to solving a problem in a relationship and comes out from behind the wall and praises her.

Later, Atharva picks up the ring and Imlie puts her hand in his hand.

He gets shocked and leaves Imlie's hand when Rudra announces her as Rana’s new daughter-in-law.

Furious Atharva tells his father he needs to talk to him immediately and goes with him while the Rathore family gets worried.

Meanwhile, the press reporters questions Imlie for becoming the family of such a wealthy family.

On the other hand, Atharva tells Rudra that he loves Cheeni but his father tells him he likes Imlie for him.

However, he doesn’t listen to his father as he cannot betray his love for Cheeni and will marry her only.

Meanwhile, Anu taunts the Rana family for leaving Imlie in between the engagement.

However, Narmada confronts Anu to not dig into the past but Anu says Imlie will bring the destruction of this engagement.

On the other side, Devika tries to make her son understand the dire situation but he does not listen.

Meanwhile, Rudra and Atharva fight with each other and Atharva tells everyone that Imlie is a great girl but he is not perfect for him.

Watching the fight with excitement, Kia tries to fuel the fight and insults Cheeni’s family name but Atharva gets furious and shuts her up.

Atharva declares that he is going to break his engagement with Imlie and marry Cheeni.

Seeing Atharva going, furious Rudra slaps his son and his face turns red due to the impact.

In the hall, Cheeni explains to everyone about the mismatched relationship between Atharva and Imlie by comparing Atharva to a cold drink and Imlie to cold milk.

In the corridor, Shivani urges Rudra to cancel the engagement as this engagement will destroy the lives of two people.

However, he stubbornly says “Rudra Rana will never let this engagement be cancelled on his watch”.

© Copyright tellybest.com, 2022, 2023. All Rights Reserved. Unauthorized use and/or duplication of any material from tellybest.com without written permission is strictly prohibited.
Cached Saved on: Monday 21st of November 2022 07:12:38 AMCached Disp on: Tuesday 6th of December 2022 12:55:08 PM