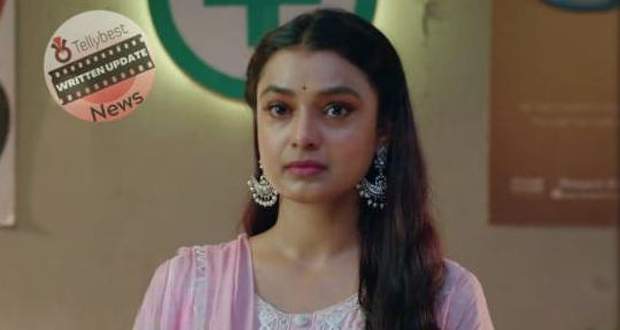 At the same time, Malini arrives and exclaims that Imlie’s motive for living in the Rathore house is complete.

Arpita taunts Malini to mind her own business while Imlie arrives at the Rathore mansion.

Seeing the tickets, Imlie recalls her emotional conversation with Aryan and accepts the tickets.

However, Narmada sobbingly begs Imlie to not take away the light from their life.

Meanwhile, Arpita calls Aryan and informs him that Imlie is going to leave with Cheeni.

Flabbergasted Aryan stops his car in shock and recalls his conversation with Imlie about not needing anyone in his life anymore.

Aryan informs Arpita to let Imlie go and cuts the call with a heavy heart.

Meanwhile, Aryan recalls all his precious moments spent with Imlie.

On the other hand, Cheeni is throwing a tantrum about not going back to Pagdandiya.

At the same time, Aryan waddles into the home and Cheeni hugs him tightly.

Aryan picks up Cheeni while she pleads with him to stop Imlie.

However, Imlie picks up her bag and holds Cheeni’s hand, pulling her forcibly.

However, Aryan holds Cheeni’s hand and pacifies her and hugs her affectionately.

Meanwhile, Imlie pulls Cheeni taking Aryan’s Sugar away but Cheeni gets unconscious in front of the gate.

Imlie screams Cheeni’s name worriedly while the Rathore family runs towards her.

Aryan takes Cheeni inside worriedly while Sundar goes to take water for her.

Meanwhile, Malini accuses Cheeni of acting and touches to shake her.

However, Imlie dares Malini to stay from Cheeni and taunts her for not accepting the blessing of Sita Maiya 5 years ago.

Meanwhile, Aryan picks up Cheeni to take her to the hospital and orders Imlie to stop fighting with Malini.

In the hospital, the doctor takes Aryan for blood donation for Cheeni.

Meanwhile, the doctor questions Imlie about Cheeni’s history of the same disease.

Imlie informs the doctor that Cheeni experienced the same unconsciousness when she was 3 months old.

Meanwhile, Malini realises that Cheeni is her Gudiya when Imlie informs the doctor that she is not Cheeni’s real mother.

Malini's heart shatters and she recalls leaving Cheeni in the basement 5 years ago.

Later on, Cheeni and Aryan are lying in the hospital while Malini is admiring Cheeni.

However, Malini drops the bomb of truth on Anu of Cheeni being her daughter.

Worried Anu questions Malini about Aryan’s reactions when he gets to know that Cheeni is his little Gudiya.