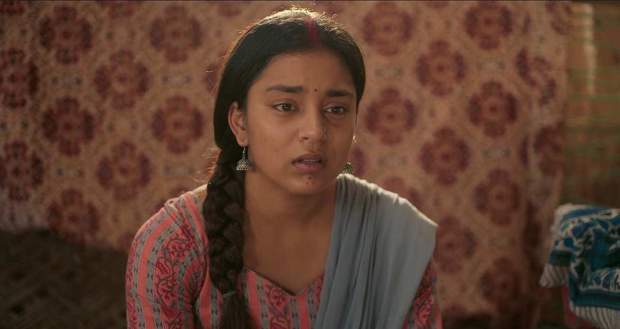 Today's Imlie 4th August 2022 episode starts with Aryan threatening Imlie and leaving after telling her that their challenge has begun.

Aryan leaves while he thinks that he will bring a tsunami for Imlie and will dump the anger of 5 years that has built up.

Meanwhile, in Delhi, Malini and Anu are arguing while Malini's phone slips and falls into the firepit.

Back in Pagdandiya, Aryan and Imlie look out the windows expressionless as they recall their moments together after 5 years.

Imlie and Aryan both go outside in the rain and get drenched to hide their tears as they recall their memories together.

The next day, Cheeni tells Imlie that she wants to eat Pizza again which irritates lmlie.

Imlie tells Cheeni to not recite his name too much as if he is god.

Meanwhile, in Delhi, Narmada calls Aryan and Arpita and Sundar asks him about Imlie.

However, they get shocked when Aryan tells them that he has vowed to get revenge on Imlie.

Meanwhile, Gudiya and Neela overhear them and run to inform Malini.

Back in Pagdandiya, Imlie tries to get things from a shop but is refuses until she pays upfront.

Later, Imlie goes to the Pagdandiya Ujala office and requests Kamal for her part of the work.

However, Kamal tells her that he isn't the owner anymore while Aryan just arrives there and makes Imlie shocked.

She demands her salary from Kamal but he tells her that she has to work permanently at Ujala if she wants to get the money.

Imlie says that she is a freelancer and would not work while Aryan tells her that the rules are changed.

Later, Imlie and Cheeni are returning from school when they pass by the shop that refused to give her things.

The seller acts nice at first and gives a bag to Imlie saying that he understands their situation and that he has put the things Imlie wanted inside the bag.

However, Imlie realizes that it is an insult as she peeks inside the bag and sees that they are filled with rocks.

She argues with the shopkeeper who behaves rudely to Imlie and even calls out Chini for being fatherless.

Having enough, Imlie slaps the shopkeeper and threatens to ruin his shop.

Just then, the shopkeeper's side worker comes there and starts threatening Imlie and Chini.

He picks up Cheeni and throws her but Aryan saves Cheeni for the second time as Imlie looks at him.