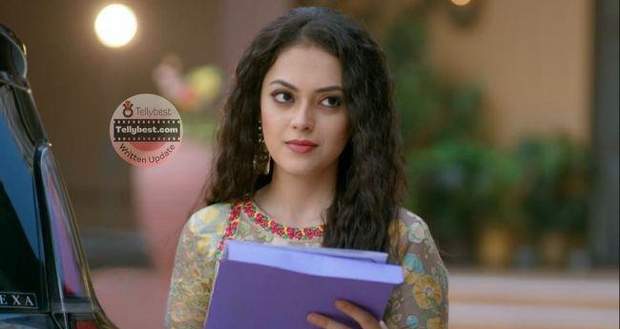 Today's Imlie 4th December 2022 episode starts with Imlie coming to Cheeni's room to give her medicines.

However, Cheeni starts taunting Imlie saying that she did not support her sister and now the whole Rana family is against her staying there.

As Imlie leaves the room, she bumps into Atharva who reveals that he has heard everything Cheeni said to Imlie.

He asks Imlie how can she let Cheeni talk to her like that.

Imlie stops Atharva from barging into Cheeni's room and tells him that Cheeni needs their love and support, not anger and scoldings.

Further, Atharva calls Imlie brave and tells her that they are going to get the bravery award the next day.

Back at the Rathod house, Rupy tells Sundar and Arpita about Cheeni's overstay at the Rana house and how she's trying to grow distances between Imlie and Atharva.

Sundar reveals that he is scared Cheeni will do something drastic.

Back at Rana's house, Rudra comes to Cheeni's room who taunts him while Rudra says that Imlie is smart.

However, Cheeni insults Imlie saying that she is a bore, and asks Rudra why he's here.

Rudra tells her that he's there to remind her that Imlie and Atharva are getting an award where they will be introduced as an ideal couple and a great team.

Cheeni gets angry while Rudra tells Cheeni that he can still kick her out of his house.

Meanwhile, Imlie is confused about what to wear as she tells Atharva that she wants to match with him.

Seeing Imlie's cute face, Atharva tells her to wear whatever she wants as they will buy a matching kurta for him to wear.

At the same time, Cheeni gets a card from a delivery boy while she opens it and is about to flip open the cover.

However, the delivery guy stops her and reminds her that there is a bomb in the chip which will cause an explosion in the next ten seconds.

Cheeni smirks as the delivery guy leaves while she says that Rudra has irritated her a lot.

She says that she will reply to her insults with a blast when she turns and gets shocked to see Atharva and Imlie.

Atharva takes the card from Cheeni and is about to open it when Cheeni takes it back saying that it is her personal matter.

Imlie asks Cheeni who is the special person while Cheeni diverts the topic to what the couple will be wearing at the award event.

Imlie reveals that they are planning to match the color of their outfits while Cheeni laughs as she says that they will look like bandmates.

The next day, the family is ready for the event while Imlie and Atharva are still getting ready.

However, Imlie's hand starts shivering as her expressions change while Atharva asks her if she's recalling the cold chamber.

Imlie says that she misses her parents and is scared to let down people's expectations now that she has done something good.

However, Atharva tells her that she does something good every day and explains to her that it is not possible to meet everyone's expectations.

As comforting Imlie with his words, he tells her that he will recite a poem from Shaira who is a mystery writer in the Bhaskar Times newspaper.

Imlie smiles as she thinks that Atharva will be shocked to see that she is his Shaira.

© Copyright tellybest.com, 2022, 2023. All Rights Reserved. Unauthorized use and/or duplication of any material from tellybest.com without written permission is strictly prohibited.
Cached Saved on: Wednesday 25th of January 2023 05:44:22 PMCached Disp on: Thursday 9th of February 2023 05:30:52 AM